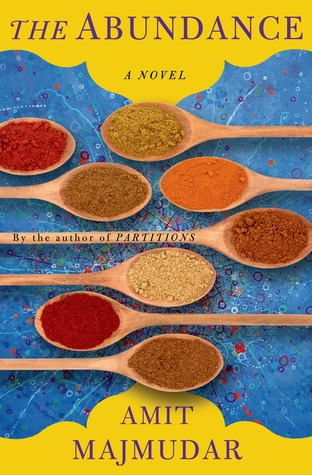 In Amit Majmudar’s The Abundance, an Indian-American mother is dying of cancer and trying to decide when to tell her children. The holidays are approaching and she fears her news will obliterate the season’s happiness but she is far enough along that there is no way to mask her weight loss and pallor. As her children arrive with their families and she struggles to maintain appearances, normal interactions take on new meaning

Our quarrel was more than just a distraction. It was a routine from the old life. After Mala found out, she would behave differently. She would be careful. That occasional harshness of hers—I would miss it. Because harshness, paradoxically, is intimate. You have to be very close; you have to be family.

For the daughter, Mala, there is a need, despite a busy career as a doctor and having two children, to spend time with her mother and, to finally acknowledge one of her mother’s gifts to the family: her cooking. To do so, she begins to cook with her mother, writing down each recipe and photographing the results, despite a lifetime of disdain for the practice.

As she grew older, she had no time, and then no patience, and then no respect for the art. It smacked of Old World female subservience; it was a chore, as lovelessly done as the dishes afterwards.

Through their cooking there is much exploration of the mother-daughter relationship, some of which is enlightening to readers of other cultures. I know of Catholic-guilt but apparently Indian mothers are proficient in the art as well and the narrator worries

It had gone through my mind when I was taking care of my mother. It must be going through Mala’s. I need to do this, or I am going to feel guilty later. That is what it is like for us good daughters. Not just guilt over the past, but fear of future guilt. Daughterhood has one natural resource, and that is guilt. Hourglass sand blows over events and words and, a million years later, there are guilt deposits, black guilt anywhere you sink a drill.

For Ronak, the son, things are different. He assimilated into American culture to the point that he did not pursue the education and career his parents want but studied finance and ends up on Wall Street. On a more personal level he marries his high school sweetheart, an American girl with no understanding or background in their culture. The family does not even meet her until they are ready to get engaged. For the mother, Ronak has been going away since he was boy and now, as she helps him accept her imminent death

He submits, shaking, in my arms. I have broken through to the old Ronak, weak as he once was, when I was all food and drink to him. When he would push his father away and call to me. This is how powerful I used to be.

The Abundance, is a sensitive look at cultural, generational, and gender issues and how each is heightened when confronted by death. Majmudar handles the process with graceful insight and even though the outcome is inevitable there is a sense of lightness and release when it comes. There is only one anomaly, a fact that can go unnoticed until finishing the book, so intimately does Majmudar delve into the protagonist’s life and history. It is just that she is only ever ‘she’. Despite the many roles she plays and the multi-faceted woman she is, she is the only character in the novel without a name. Although we inhabit her world, hear her voice and thoughts, she remains oddly anonymous, un-named. It is not enough to spoil the story, but adds to the sadness of her death.

As Close to Us as Breathing
All Things Cease to Appear

And the Mountains Echoed

Burial Rites
You Will Know Me

The Good People: A Novel