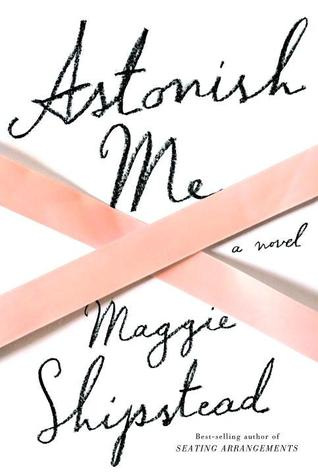 Joan Joyce is a dancer who has wanted to be a ballerina her entire life. Unfortunately her desire outweighs her talent and so she is relegated to the corps. The center stage she longs for does not become hers until she is the woman who helps a young Russian dancer escape from the Soviet Union to the United States. She had seen Arslan Rusakov dance in Paris and had kept in touch with him via passionate letters about ballet until he lets her know he is leaving his country. For Joan, the chance to be with him and to bring him to the same company where she dances is the culmination of her dreams.

Maggie Shipstead’s novel, Astonish Me, follows Joan, Arslan, and Joan’s friend Elaine throughout their lives as dancers, and, in the case of Joan, as a woman who decides to pursue another path. When her love affair with Arslan fades, she returns home to her high school best friend, Jacob Bintz, they marry and settle into a quieter life. In this way Astonish Me cycles back and forth through the mundanity of Joan’s current suburban life and the intensity and excitement of the life of a dancer. Much of the novel is taken up by the rigors and language of dance. This is interesting but as the story continues and Joan moves out of the dance world and into the world of being a mother and a ballet teacher, the novel feels less sure footed. Somehow the juxtaposition of the young Joan in New York City and the older Joan in Southern California with her life as wife and mother causes the novel’s tempo to drag.

The uneven pacing and abundance of ancillary stories in Astonish Me gave it the feel of a short story collection but, with the final chapters the novel begins to gel. The ending, when it comes in the final quarter of the book, is the soloist and draws together all the elements. To carry the ballet theme a bit further: much of the novel feels like the practice and disjointed rehearsals that lead to a performance. The good news is that Shipstead executes the truly difficult moves, resulting in a poignant conclusion.

November Reading Wrap-Up
Monday January 12th: What Are You Reading?

The Necklace by Claire McMillan
Hunters in the Dark