If, like me, you’re not overly involved in politics you’ll read the title of Bridget Siegel’s new novel, Domestic Affairs, and think it is some kind of tell-all fiction like The Nanny Diaries or any of Amy Sohn’s looks at life in upper echelon households. You’d be wrong. It is the story of an idealistic fundraiser, Olivia, who gets the chance to manage the fundraising portion of her favorite politician’s campaign for president. At the tender age of twenty-seven she is fulfilling her dream to help the man she believes can save American politics from its decline.

Siegel has a great concept in Domestic Affairs. Few people know or understand the rigors of campaigning and what it takes to manage a candidate’s life so they can focus on their message and getting elected. By halfway through the book I was feeling the sleep deprivation and borderline starvation Olivia feels as she works twenty-three hours a day and eats Doritos as her main meal. The story moves as quickly as the campaign and is light, fun reading. Until that is, Siegel opts to go down a path for male politicians that is so well-worn it’s more like a trench. The results become predictable and significantly less interesting.

The beginning of Adam Pelzman’s debut novel Troika, can’t help but feel like a Carl Hiassen novel—seamy Miami strip club, bored but earnest stripper, wealthy mysterious customer walks in—you get it. Pelzman definitely understands the feel of what such an environment must be like and so it is no surprise that the undereducated but bright and inquisitive Perla, a Cuban immigrant, has a fresh faced look that allows her to catch the eye of Julian, an older gentleman who has wandered in to kill time and get a lap dance.

Pretty Woman territory? Not really. Troika has enough twists to power punch a plot and still achieve tenderness in the face of unforeseen and unusual circumstances. The novel is told in the first person perspective of two women, Perla and Julian’s wife Sophie, while Julian remains a man of mystery and action, told in the third person. This concept leaves the women acted upon while Julian acts. This is not to say that Pelzman fails to capture the female voice but it wobbles at times between pathos and feminine hysteria.

This is a plot driven story that will entertain but when the wronged wife, Sophie, goes completely off the rails, credulity stretches to the breaking point. The results, while heartwarming, are not believable. Troika is interesting with a compelling storyline and backstory but trying to parse this debut novel too finely will lead to more questions than answers. 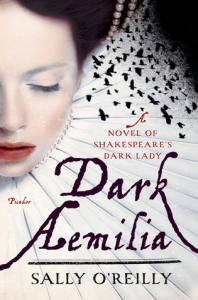 There are almost as many tales written about Shakespeare as those he wrote himself.  Debut author Sally O’Reilly enters this much trodden territory with Dark Aemilia, a novel that combines two actual historical figures, Aemilia Bassano and William Shakespeare, to create a fictional affair that haunted both throughout their lifetimes.

Aemilia is a woman unique for her times in that she is better read and more intelligent than most of the men who surround her. Unfortunately, as an orphan her options are limited and it is her great beauty that earns her a life of luxury as the mistress of one of Queen Elizabeth’s Lord Chamberlain’s, Lord Hunsdon. Then she meets the young William Shakespeare and they embark on a passionate affair. When she becomes pregnant, she is uncertain of the father but knows her only course of action is to pretend it is Hunsdon’s so that, while he’ll have to send her away from Court, he will still support her and marry her off to someone from his retinue. She accepts her fate and breaks it off with Shakespeare because he is also married and poor to boot, but it ends badly between them.

O’Reilly excels at recreating sixteenth century London from the finery of life at court to the muck and filth that lined the streets most lived on as Aemilia moves from one world to another in her fall from court life.  Where the novel runs into difficulty is as it moves beyond the actual lives and events and into a ghost/horror story that seethes with as many ingredients as the cauldron of the three witches in MacBeth (who make an appearance in a quest for Aemilia’s soul). When the plague hits London and Aemilia’s beloved son, Henry is struck down, she turns to black magic to save his life and conjures a foul demon who agrees to let him live in exchange for Aemilia’s promise to write of her fevered night spent saving his life. She agrees but again, her now acrimonious relationship with Shakespeare gets in the way and O’Reilly escalates the drama well beyond anything taking place on the stage of the Globe Theater.

All of these components build in a manner that feels more frenzied than the plot warrants and detracts from the story of the relationship with Shakespeare and the struggles of a woman trying to be taken seriously at a time when they could not even be published. These added elements may be appealing to other readers but for me it amounted to more toil and trouble than the novel was worth.

The Editor by Steven Rowley

The Husbands: A Novel by Chandler Baker