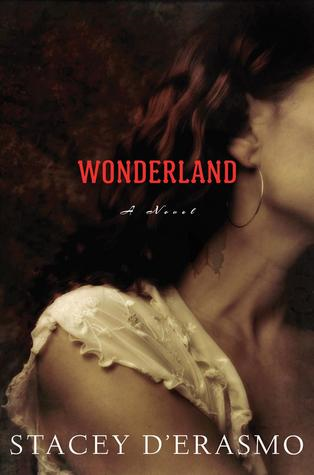 In fact, I was in wonderland then, but only in some hazy amber of memory. At the time, I wasn’t anywhere. I was reaching for the train as it disappeared, flash of silver, around a curve. Now I’m trying to go back to a place I’ve never been.

Anna is a rock star. Not the classic variety but the indie variety. On her way to the top, with a record deal in hand and three albums to her name, she stepped off the ladder and went silent, but now she’s back, in Europe launching a new tour. Wonderland

is Stacey D’Erasmo’s look at the journey, from its beginnings when the adrenaline and newness fuel the music to the decidedly unglamorous weeks of exhaustion, aimless hook-ups, bad food and ennui that infiltrate the passion, leaving only a painful sense of dislocation as day and night blend and everything begins to look the same.

Anna was introduced to the arts at an early age by her parents. Her father creates massive sculptures by taking large structures and cutting them apart, leaving them where they stand. It meant a childhood of travel and excitement but little stability. This artistic sensibility translated itself into music for Anna and meant that her emotional connection with her father deepened even as they saw less and less of each other.

I have had the conviction for quite some time that if I could do in music what my father did in space by sawing the train in half, then I could solve the mystery of my life.

It is this relationship with her father, and her father as artist that colors much of Anna’s feelings about herself. As he ages and his ability to create declines she finds herself oddly angry at what age has done to his talent, leaving the reader to wonder if these feelings are the impetus for her heading back on the road at 44. Even her accomplishments, coming up against those of a father whose very name made her entrance into the music world easier, are, in her mind questionable. But now, he is a man who paints the same scene of a field over and over. Is his diminishment hers? She writes to her sister Lila

I always thought he’d be back, didn’t you? I mean: I thought he’d find it again, what he’d lost, his heart, his nerve, his honesty…

The novel is a mental retrospective of Anna’s life, made in the endless hours spent anywhere but onstage and composed of letters to her sister Lila, visions of her father and the minutiae of his creative life, the years spent with her married lover who cannot bring himself to leave his family, and her own struggles to find the musical space that once defined her. All pass on the pages, written so intimately and thoughtfully by D’Erasmo that the undercurrent of yearning and regret feels familiar to anyone who’s watched the years pass. How much of what she is feeling is about her career and how much is about her place in this world? For as much as is shared there is a mysterious quality to the novel. By its end, there is uncertainty as to the path Anna chooses—is it one from the past or is it her future?

There is an ache in Wonderland that goes beyond a woman on tour at a stage in her life when a comeback seems like a long shot. It is the innermost musings of a woman caught between worlds. D’Erasmo captures the fractured quality of touring by breaking each chapter into single thoughts, memories, or events—the regrets, happiness, questions and mental wanderings that come to mind when you’re trapped on a train or plane in between destinations. This chopping of Anna’s narrative renders these thoughts even more poignantly, because it feels as if we have come upon scraps of paper crumpled and inadvertently left behind and are reading something that does not belong to us. Or perhaps, the ache is because it does. Because it speaks to every one of us.

More Than A Woman by Caitlin Moran