Life here was weighted with the vague feeling that if anything was happening, it was happening wherever one wasn’t. Maybe that accounted for all the driving…Eleven million people scurrying around, trying to find the exclusive exciting event that would make them feel at the center of something big.

Mimi Fitzhenry is the type of living-in-Hollywood character who chooses to host book club because she had her apartment cleaned rather than pick up her sister, whom she hasn’t seen in seven years and who is flying 21 hours from Nairobi. Mouse, the sister, is only returning because Mimi’s phone call to her was so garbled that she thinks their mother is dying after being hit on the head by a ceiling fan. Mimi’s take-away from the conversation is that Mouse is getting married, which is she is not. These are just two small pieces of the foundation for Karen Karbo’s witty delight, The Diamond Lane.

There are so many ways to go when skewering life in La La Land and Karbo uses almost all of them to great effect. Mimi is the quintessentially self-absorbed, bulimic twit who spends money she doesn’t have and frets endlessly about her weight to the point that she envies her mother’s coma because being tube fed for a couple of weeks would allow her to lose weight. Mouse is earnest, bright and independent, so she must also be frumpy and clueless about men. She is a documentary filmmaker who now finds herself back in a town she does not understand, trying to get a distributer for her films. She agrees to marry her boyfriend Tony because she thinks her mother is dying. Once they settle in L.A. they face their own unexpected challenges, meaning Tony is swept up in the hype of the film industry and finds himself writing a screenplay about his relationship with Mouse in Africa without her knowledge. He rides in fancy cars, “takes meetings”, and quickly acclimates to the life she abhors. She, on the other hand, is so out of her element that she tries to walk everywhere and is stopped by the police, who want to know what she is doing.

Karbo widens the lens in The Diamond Lane by adding Tony and Mouse’s wedding to the mix of consumerism out of control. When Mouse meets up with an old flame who is also a filmmaker he asks her if she wants to produce a documentary he’ll make of her wedding. Desperate for money, she agrees (without telling Tony) and a no-budget on the beach wedding explodes into the heights of bridal insanity, including a dressmaker named Ludvica who, if she decided she didn’t like you midway through making your dress would cut it up into doll clothes and donate them to a children’s hospital. And let’s not forget that the only candles worth having are those flown in from the Vatican and the tiny handmade chocolate favors must sit atop lace crocheted by nuns in France.

The Diamond Lane overflows with sly and vicious observations about all that is superficial in the world of two over-the-top, narcissistic industries but in the midst of all the scathing satire and the withering prose, Karbo still manages luscious bits of insight into real human emotion.

She was not angry. Being angry implied that one day she would cool down. It implied a door was still open, even if only a crack. When she got angry, the door slammed. It locked. Then the locks were changed.

The diamond lane is the HOV lane on most highways and in L.A. it’s the only way to get ahead, making it an apt title for a novel where everyone has an agenda and is looking to arrive. Karbo tucks the reader beside her in the driver’s seat and cruises through the foibles of the characters and their situations with such dexterity that even as the crash looms ahead you’re laughing.When the inevitable arrives, it is accompanied by a perfectly timed sleight-of-hand that reaffirms the importance of high wit—writing so sharp but subtle that you have to be wide-awake to get it. The only problem with The Diamond Lane? The ride ends and I wanted to keep reading.

Maybe that was the real cause of smog, thought Mimi. The chemical reaction between kitchen grease, ozone, and a jillion sour dreams and ruined hopes.

Almost Everything: Notes on Hope

The People We Keep: A Novel 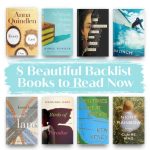