We Are All Completely Beside Ourselves by Karen Joy Fowler
Published by G.P. Putnam's Sons
Publication date: May 30th 2013
Genres: Childhood, Contemporary, Fiction 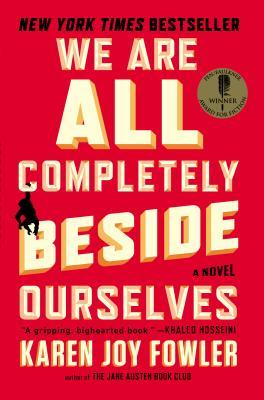 Narrator Rosemary Cooke begins We Are All Completely Beside Ourselves in the middle of her family’s story, which is a quick indication of how this unusual and highly imaginative novel is going to go. The year is 1996 and she’s in her fifth year of college. A gregarious child she has morphed into a quiet and secretive young woman, largely due to the circumstances regarding the disappearance of her sister Fern. Despite it being the middle of the story Rosemary drops clues about the beginning, when she, her brother Todd and her sister Fern all lived on a farm and what seemed like a relatively normal childhood. But by 1996 both Fern and her brother are gone, her brother seeming to have embarked on a career as a domestic terrorist fighting for animal causes.

In Rosemary author Karen Joy Fowler gives us a narrator who relates her life with a great deal of self-deprecating wit but whose stream-of-consciousness style means we move quickly from one time period to the next in a way that can be disorienting. She herself acknowledges

This doesn’t mean that the story isn’t true, only that I honestly don’t know anymore if I really remember it or only remember how to tell it.

Although only five years old at the time she believes herself to be the cause of Fern’s disappearance, the event that caused the end of life as she knew it and drove each of the family members off into their own corners. It is also when she stopped talking so much because talking could lead to recognition of and explanations about her family which was something no one wanted. Instead, much of We Are All Completely Beside Ourselves is narrated from inside Rosemary’s irreverent, knife-blade sharp mind as she brings forth memories of her sister and their life and the almost inevitable loss of Fern. It is only as she reconciles her inner perceptions and outer world that Rosemary begins to find answers.

Fowler creates a novel in We Are All Completely Beside Ourselves that is fantastical and yet grounded in some of the sensational news of recent years and it is easy to see why she made the Man Booker Award shortlist for 2014. What happens to Fern and the truth of Rosemary’s childhood comes to light in bits and pieces while Rosemary slogs through the present day in hopes of seeing both her brother and sister again. To lay out such a novel (where to review most of the plot results is a spoiler alert) is no small task but in Fowler’s hand it flows freely from incredulity to sadness, not just for Fern, who was taken, but for Rosemary, who was left behind. For her, childhood is both a burden and a joy to remember and leaves her emotionally split down the middle.

It’s hard to overstate how lonely I was. Let me just repeat that I’d once gone, in a matter of days, from a childhood where I was never alone to this prolonged, silent only-ness.

It is Fowler’s quick, fresh prose that gives Rosemary her mocking humor about herself and lures the reader into her perceptions about her childhood. We Are All Completely Beside Ourselves is quirky and, for some, may not make sense but there is no denying the power of Fowler’s inventive mind and how plausible she makes Rosemary’s world, until it is not.

Dietland: A Novel
The Missing One