Some people think of reviewing books as solitary, quiet vocation and often, they are right. How nice then, to attend a book event that ends up feeling like a movie premiere—complete with large crowds, screaming fans and people in costumes. This was the fun-filled case earlier this week when I was at the University Book Store to see actor Cary Elwes talk about his new book, As You Wish. It is a memoir about the making of the movie, complete with behind-the-scenes photos and reminiscences from the cast and crew.

Now, in case you don’t go to many book events, let me fill you in: 40 people is a really good crowd. I’ve been to events for authors and books I loved and only 10 people have shown up. However, when you’re talking about the lead actor in a movie with staying power that has expanded over the last twenty-five years it’s a different scenario. Namely, when Elwes first appeared, people (men and women) screamed. Yes, jumped up and down and screamed. I was fortunate enough to be in the front row as evidenced by the fact that I now know Mr. Elwes’ jeans’ size and that he wears a very nice spicy, woodsy aftershave, but I was a little scared. There was a surge behind me as the enormous crowd (I’m guessing around 200 people) moved towards the star. Here is  the first shot I was able to take where he was far enough away that I could get my camera to focus. He had just admitted to drinking Starbucks which, although it is based in Seattle, is frowned upon by Seattle coffee lovers (don’t ask me why, I drink tea). His excuse? “I’m British and don’t know any better.“ 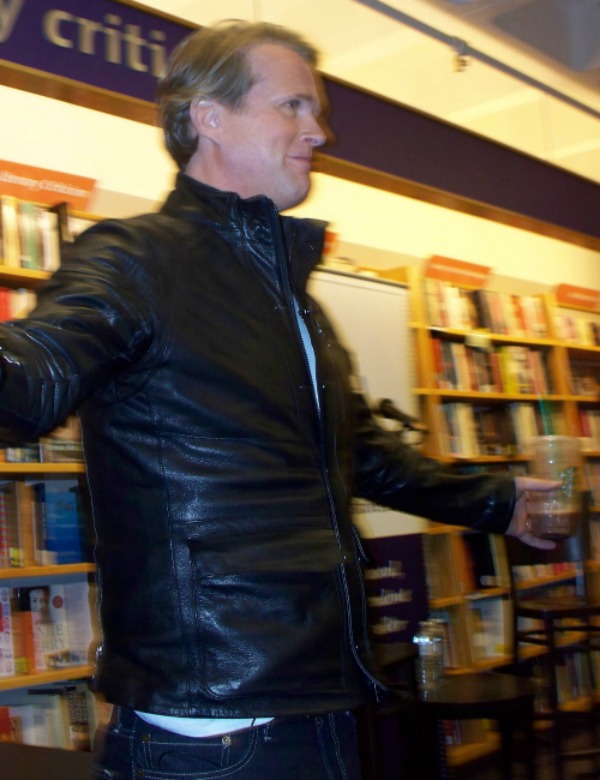 From the moment he entered he was charm personified, joking and recounting personal stories about The Princess Bride with Nicole Brodeur from The Seattle Times. These are the stories that make up the book, As You Wish, which if you were born on Mars and didn’t know, is his most famous line in the movie. Most famous but not his favorite. When asked about that he admitted, “I’d have to say, ‘Anybody want a peanut?’” He also talked at length about Andre the Giant who became a close friend during filming and with whom he stayed in touch until Andre’s death.

Elwes humor and graciousness—in the face of so many fans of all ages, with questions that spanned his personal life (what was it like kissing Robin Wright) to challenges (do you remember all the steps from the fencing scene with Inigo Montoya)—made the time pass quickly, but it was this young boy who captured everyone’s heart, including Elwes’. Just another Princess Bride fan!

The Life and Love of Cats
Coming to My Senses: A Story of Perfume, Pleasure, and an Unlikely Bride

At Home with Madame Chic
Guapa: A Novel
Mrs. Houdini

The English Wife by Lauren Willig

The Gimmicks: A Novel