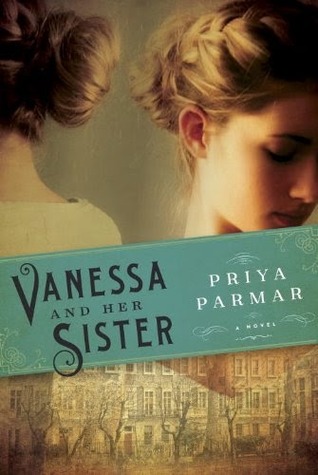 Virginia Woolf is an icon in the world of literature and much has been written about her life so it is a courageous move on the part of author Priya Parmar to explore not Virginia but her lesser known sister Vanessa, in her new novel Vanessa and Her Sister. The novel begins during the heady years when the Stephen family—Thoby, Adrian, Vanessa, and Virginia—are living on their own in the Bloomsbury area of London. From these beginning pages Parmar infuses the novel with the loose-limbed graciousness of the four siblings as they form a group of like-minded friends who lounge, laugh, drink, and argue through long nights in the Stephen’s house. It’s the early 1900s and they simply have no time for the staid etiquette and mores around them. Instead, with friends like E.M. Forester, Maynard Keynes, Lytton Strachey, Duncan Grant, and Clive Bell they live largely as they please, with the kindhearted Vanessa managing the household and trying to keep Virginia away from the encroaching edges of madness.

Vanessa and Her Sister covers the years from 1905 to 1912, a tumultuous time for Vanessa and her siblings. By formatting the novel as diary entries by Vanessa, interspersed with telegrams and written letters to other friends and family Parmar manages to capture the zeitgeist of what is now known as the Bloomsbury Group. On a more intimate level Vanessa shares, with a startling acuity, her feelings about the mercurial Virginia.

I wanted Thoby’s friends to see her dazzle the way she can when she chooses to rake the conversation into a leafy pile and set it alight.

As women in their twenties they are supposed to be getting married, but as siblings recently orphaned it is a prospect they don’t want to contemplate—Virginia in particular—who views her sister with a proprietary fury.

I know she is terrified I will get married, just as I am afraid that Thoby will get married. As soon as one of us goes, the thing unravels and the whole of us comes apart.

Vanessa finally marries Clive Bell and with the birth of her first child embarks on a more traditional way of life, one that Virginia is loath to recognize. She fights with the weapons at her disposal- a sharp intellect and her air of unavailability as she refuses suitor after suitor. Instead, she turns her attention to Vanessa’s husband.

It is known that Virginia battled severe depression throughout her life but Vanessa and Her Sister keeps the focus on its impact on the people around her. Her struggles with mental health issues did not rob her of a nature that knew how to manipulate and even to ignore reality to get what she wanted. And if it resulted in actions that hurt those around her, she used the ties of childhood and whimsy to wheedle her way back into favor. This comes through as Parmar uses the correspondence of friends who see what is happening to their group dynamics. It is bittersweet to watch Vanessa as she tries to claim her own life and disengage herself from this deeply entangled relationship.

There is no rational, logical, reachable Virginia lurking beneath, and eventually Virginia becomes exhausting.

Vanessa and Her Sister passes from the youthful atmosphere of genial bohemia into the more freighted territory of adulthood and the difficult journey of finding one’s self. With each page, Parmar’s prose glows with delicacy and a tender gravity. Even as the harsh realities of life intrude, she never loses sight of the softness, the gentle love with which this eclectic group tried to stay true to each other and the ethos of their youth. At the same time she makes it clear that, despite the cost to herself, it is largely due to Vanessa and not her sister.

Vanessa is an ocean of calm even if she does not know it…Nessa is powered by some internal metronome that keeps perfect time, while the rest of us flounder about in a breathless pitching exaggeration, carried by momentum rather than purpose.

Coming to My Senses: A Story of Perfume, Pleasure, and an Unlikely Bride

The Splendid and the Vile by Erik Larson