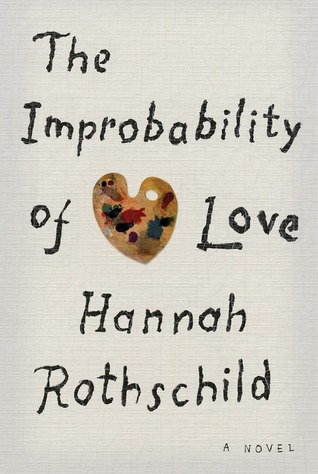 When Annie buys a painting at a junk shop in London she has no idea what she’s getting herself into. It’s supposed to be a gift for a new boyfriend but when he’s a no-show she keeps it. The now ex-boyfriend is only one more disappointment in a life that seems to be stalled, in Hannah Rothschild’s new novel, The Improbability of Love. At 31 Annie has a temporary job working as a private chef for the Winklemans, owners of the most prestigious and largest art gallery in the world. They are a father and daughter, whose heritage in the art world stretches back to World War II when the father,Memling, not only survived Auschwitz but emerged to build a life and legacy as one of the world’s best art dealers. Despite their great wealth they eat bland, simple foods so Annie’s days pass in boredom, except for the few occasions when they entertain and she is able to marry the art of cooking with art.

… she wondered if the artist looked at pigments and bases the same way that she thought about food: imagining the collision of different colours, the mixing of pigments and the overall end effect. For both the chef and the painter, creating tastes or scenes from an assortment of base ingredients was a way of navigating the world.

What Annie doesn’t know is that her dingy, smallish painting is by the famous French painter, Antoine Watteau. And we only know this because the painting tells us. I can’t recall another book where the most engaging narrator is an inanimate object, but Rothschild imbues the fictional painting, The Improbability of Love, with such a delectable air of hauteur and sardonic humor that although the humans do an admirable job playing their parts it is he who lures the reader in and keeps them spellbound as he recounts his history through the centuries. From being owned at various points by Phillip and Isabella, Catherine the Great and Marie Antoinette he leads the reader through his journey—sharing snippets of his times with each in the easy gossipy manner of two old friends dishing over cocktails.

A unique narrator is only one of the elements that makes The Improbability of Love addictive reading. Rothschild also concocts a plot that adds the perfect shades of mystery and danger to a cast that encompasses the art world in all its seriousness and pretention. There are those being catered to, in the form of sheiks, heiresses and Russian oligarchs and all those doing the catering—art historians, museum directors, auction house owners, dealers, and art restorers. And while Rothschild showcases these personalities in their gilt frames, her real life involvement in the art world gives the novel’s historical details the patina of accuracy.

From a skittish prologue where the characters clustered and preened, making me feel like this may not be a party I would stay at long The Improbability of Love segued into the best of all dinner parties—conversation flowing, a setting to delight, and a plot so fulsome and delicious I did not want it to stop. This is the kind of novel that incites emotional investment to the point where talking to the book is not unusual. For me it occurred at a plot twist I didn’t like or expect (but later understood): “No, this would not happen. Why? Why would she do this?” Rothschild is as much an artist of her craft as Watteau was at his and like the fictitious painting it is based on The Improbability of Love is a creation that will entertain and delight.

Still, a masterpiece develops a certain sang-froid born from a belief in the triumph of excellence. After all, what are a few decades when there are centuries ahead in which to inspire, please and inform?