Love Is Red: A Novel by Sophie Jaff
Published by Harper Paperbacks
Publication date: May 10th 2016 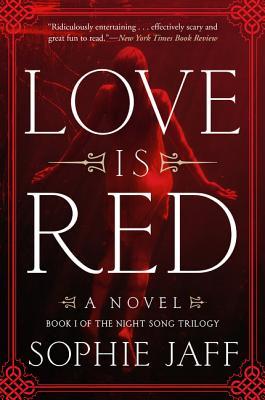 I was 6 pages into Love is Red when I realized my heart was pounding. Pounding enough to notice, which is not normal. Sophie Jaff’s novel opens with a seduction scene—told from the perspective of an unnamed man who woos a woman at a bar. The action inevitably moves to the woman’s apartment, but this is not a crude encounter, Jaff’s writing is as smooth and well-paced as this man’s moves. The adrenaline comes when his thoughts veer from sex to violence and her arousal becomes terror. Even then, Jaff handles things superbly, closing out the first chapter of a novel about a serial killer in NYC with finesse. Not blood and gore, not more detail than most of us want to know, just the same psychological fear that appears in the mind of every single woman living in New York at the time. Who’s next and why, because this killer has a plan.

But you know this; you know they had dreams and hopes and passions and longings. They were brimming with life. That’s why you chose them.

Before the first victim is discovered and the fear begins Katherine starts dating a man she met online. David is shy and a little bit goofy the exact opposite of his friend Sael, who is exotic and seems excitingly dangerous. Somehow she ends up involved with both—David because he’s a steady boyfriend material and Sael because he is the perfect antidote to her boring-temp-job life. A love triangle set in the midst of a killing spree may not be the most unexpected plot, but Jaff keeps the suspense going by flipping chapters between Katherine and the unknown murderer. The fact that she uses the heightened senses of the killer to produce bursts of synesthetic text where wistfulness is apricot and suffering is a deep and spoiled black that smells of sour wine make for immersive reading that touches all the senses.

Love is Red goes in a lot of directions. There are pages of an old fairy tale about a magical maiden interspersed throughout the novel which morph into a fantasy of evil spirits well beyond a lunatic who likes killing women and carving symbols on their bodies. But no matter what else I might think about this book one fact remains: I read it in a single sitting. At night. Alone while my husband was traveling. That’s huge. And if at the end, Jaff’s perfect pacing gets ahead of itself, turning Love is Red into a frenzy of plot and action that muddles things somewhat, it is still not enough to negate the fact that I could not put this fantasy, suspense thriller down.

The Cuban Affair by Nelson DeMille