The Time in Between: A Memoir of Hunger and Hope by Nancy Tucker
Published by Icon Books Ltd
Publication date: April 7th 2016
Genres: Memoir, Non-fiction 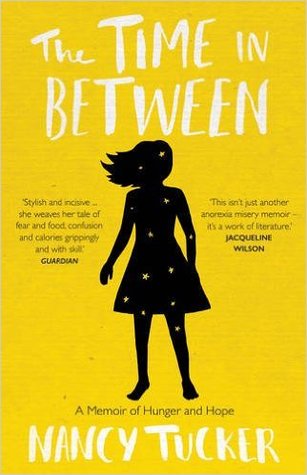 This is the final review from my recent mental health reading and it was easily the most difficult because it’s non-fiction. The Time in Between is Nancy Tucker’s memoir about her life from the time she was a little girl until present day, with the focus on her teen years. Her life changes at age eleven, while attending a private girls’ school, which makes her insecure about everything—her intelligence, her looks, her family. She decides that there are three things that could make her life better, make her fit in—to be rich, to be pretty, to be thin. She can’t get rich at her age, she isn’t pretty (enough,) so the only option she can control is thin. And she does, for the next twelve years.

It is frightening to learn how reality can be twisted to create facts that suit the individual. When Nancy is faint with hunger she convinces herself not to eat because all the news is about the Obesity Epidemic so she could not possibly be too thin. Everyone is fat so she must be fat. She is constantly cold because of climate change. She is weak because she is lazy and out of shape and so must swim more, bike more. By less than a third of the way through the reading is painful—to know that someone’s mental illness is so severe that they count the number of cornflakes they eat (no more than 6). And that is less than halfway. By the time Nancy is fully immersed in her anorexia she goes three months without food, subsisting on water and Diet Coke.

A memoir like The Time in Between is guaranteed to raise certain questions in the reader’s mind. If at this point you are screaming at your screen ‘where the hell are her parents?!’ I can see why, but they are in the home trying to help their daughter while taking care of another child and holding down their jobs. She has a dietician, a psychologist and a family therapist that she and her mother see every week, but her weight continues to drop because she sews stones into her underwear and drinks liters of water on weigh-in days and buys duffel bags that she stuffs with uneaten food from the dining table and throws into a ditch behind the house. They are simply no match for the brilliance of Nancy’s disease.

There is an elation which begins in the bottom of my stomach and gurgles up, bubbling in my head and twitching at the corners of my mouth, because I realize that no Big and Scary Decision ever need bother me again–as long as I’m losing weight, nothing else matters.

In recounting her anorexia Nancy utilizes a number of formatting and stylistic options that showcase the creativity of her mind, even at its darkest. Much of her world is labelled: there are the Friends, girls she goes to school with and wants to be like or competes with; The Voice, the never quiet noise that chides her for everything that is wrong with her; The Diet, the sole focus of life and Perfect, the ultimate goal. The Voice is particularly insidious because no matter how thin she gets it is not good enough. Even as she is being checked into a Children’s Hospital where she is informed that her grossly swollen feet are because her heart can no longer pump blood properly, that she is covered in a soft down known as lanugo to try and keep her core temperature up, that her chest x-ray shows there is no fat surrounding her internal organs, The Voice is only slightly impressed and thinks the doctor is exaggerating.

Beyond labels, Nancy shares diary entries from various points that list her food intake (a grape, water), exercise (she stops taking the bus to school without telling her mother and walks instead even though it is over an hour each way), and how her school skirt fits (her main source of measurement, which by the time she is fifteen, falls off—her everyday clothes are sized for a 7-year-old). These are interspersed throughout her narrative with scripts of conversations and scenes she imagines as to how best to solve her ‘problem’.

For as glaring a blind spot as Nancy has about her illness, she writes with tremendous self-awareness in recounting her descent into the depths of anorexia and, later, bulimia (an anorexic’s best friend because you can gain some weight but still maintain control, despite the havoc it wreaks). Nancy does not shy away from the utter deviousness she employs to keep losing weight—replacing Ensure with skim milk, putting weights in her underwear on weigh-in days, drinking liters of water before being weighed, sewing baggies into her pockets where food can be stuffed until it is later thrown out…it never ends. She lies, dissembles, cajoles, blames, screams…anything to avoid caloric intake. That anorexia is a disease of almost unparalleled deviousness, in its ability to thrive within the right mindset, makes the reading even harder, because sympathy fades and alliances shift towards everyone else in Nancy’s life. She knows this.

Throughout all of this, there has been little understanding on anyone’s part, especially Nancy’s, that anorexia is a mental illness and should be treated in the same way. It isn’t until Nancy’s medical condition is so bad that she can hardly function at all that she acknowledges what is happening to her

Perhaps there was a time when I could do the things you wanted me to do, I just wouldn’t. But now, you see, I would do these things you ask of me, but I can’t.

Even then, her journey is not over and while old Voice abates it is replaced with a new one: The Hunger Voice. Anorexia becomes bulimia. Suddenly, there is not enough food in the world and it must all be eaten. The young woman who was the size of a six-year-old becomes overweight. It isn’t until she meets The Right Therapist that the memoir shifts to hope.

It was what I had always, deep down, known, but never believed until then: as The Right Therapist showed me, my starvation was not impressive and my binge and purging was not morally repugnant. They were just behaviours: behaviours I performed when I was unhappy. In the end, neither was important—what mattered was the unhappiness.

The Time in Between is a memoir of excruciating detail. Literally. Painful detail about what can be done to the body in the name of an unachievable and irrational goal. Nancy does not share these details lightly. At the book’s beginning she explains that, given the gruesomely competitive nature of anorexia, there will be no mention of weight, BMI, calorie counts—any numbers that might turn her memoir into a manifesto for other anorexics. What there is is her truth and while it is difficult reading that will evoke contradictory and unkind emotions (anger, pity, disgust, frustration) it is important enough to recommend. Not just for the subject matter, which is becoming more relevant all the time, but because even when relaying the most unpalatable aspects of her life Nancy’s wit, creativity and intelligence shine through. She is a gifted writer who struggles with a disease without a cure and I want to see what she does next.

The Sacrifice
The Book of Joy: Lasting Happiness in a Changing World
Adnan’s Story: The Search for Truth and Justice after Serial

What Could Be Saved