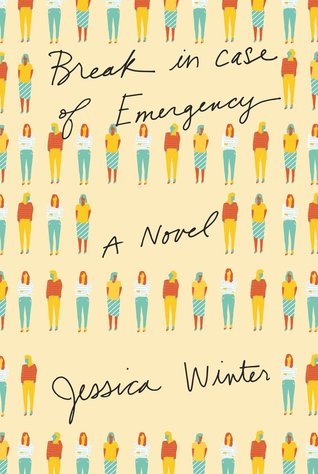 Poor Jen. She was an artist while in college, but gave up after school and got a communications job at a non-profit. Which then hit hard times and laid her off. Now she’s at a new foundation started by Leora Infinitas (that’s not a typo on my part), a former sitcom star who achieved her wealth by marrying old money. Literally, her husband was old. And then he died and the money is hers and she’s created LIFt, her foundation to empower women, among other things. This is the world created by Jessica Winters in her debut novel, Break in Case of Emergency. A world she populates with sycophants who spew the type of meaningless jabber such as the directive Jen gets in one of her first meetings

“We must focus on those projects that feel most immediate to us. This sensation of the year two thousand and nine leaping bravely into spring after such a bitter winter—what does that feel like? Let’s capture it; let’s hold that moment and transform it. We can return to other, more timeless ideas later—a wellspring of creativity that will nourish us when we fell depleted from giving birth to our first-idea children.”

For Jen, who is looking for meaning in her work, this quickly becomes a problem, especially as her boss Karina has

The gift of shrouding any and every topic in a fluffy word cloud of reiterative agreement until the original query was swallowed up in the woozy vapor of resounding enthusiasm for an unstated but sublime goal.

Winter is to be commended for keeping up the jingoistic blather in Break in Case for page after page without missing a step. But, while it’s funny in a way that made me want to jab a pencil in my ear and laugh at the same time, it is just one aspect of the novel. She goes beyond the satire to the not-so-funny world of adulting, where trying to have a baby is easier if you don’t talk about it directly, when friends are changing in ways you’re not and the honeymoon is over in your marriage…all the things that make it easier to laugh about your job rather than cry about your life.

What starts as a fabulous riff on the nonsensical jargon of new-age corporate speak run amok turns into the things that really matter. Is Jen going to change LIFt and the vacuous women who run it? Not likely. But is she going to find her own way in her own life? Probably. Thanks to Winter’s skillful piloting Break in Case of Emergency moves easily from humor to depth, creating a novel that is anything but shallow.

We Begin at the End