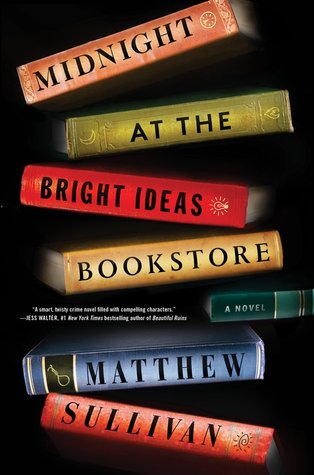 I’m a sucker for fiction about books and bookstores so to find a novel about them that is also set in Denver, Colorado (where I lived and still have family living) means I didn’t have any choice but to read Midnight at the Bright Ideas Bookstore. Add in the fact that in the first ten pages, Lydia, a kindhearted bookseller, discovers Joey, one of her favorite misfit customers, has hung himself in the store and you have my attention. Oh, and he has a picture of her from when she was ten-years-old in the front pocket of his jeans. A picture she’s never seen before. BOOM! Questions exploding everywhere and I want answers.

As if the present weren’t dramatic enough author Matthew Sullivan gives the gentle Lydia quite the past—when she was ten her best friend and her best friend’s parents were brutally killed and Lydia survived by hiding under the kitchen sink. After which her father moved her out of Denver and into a tiny mountain town. Now, almost twenty years later she is back and a young man she knew only as a customer is dead with a photo of her as a child and he’s left her his few possessions. Who is he? And what is he trying to tell her? Here is where Sullivan shines. He seeds Midnight with the kind of characters that catch and keep the interest. Not just the lovely Lydia, who is the epitome of book store goodness—a kindly introvert with the magical ability to listen to customers and find their perfect book, but also her father, Joey, her childhood friend Raj and the various people who work at and populate the bookstore. They’re all the perfect accompaniment to a mystery that takes place in the present and the past.

Sullivan lays out the clues with a fiendish precision in Midnight. Joey has a message for Lydia and his method for sharing it with her is the sort of thing that thrills booklovers—a puzzle within the books themselves. He utilizes this love to take a firm grip on the reader’s attention and doesn’t let go. This control of the narrative is strong for the majority of Midnight, but slips in the last quarter when Sullivan takes a plot that teeters on the edge of plausibility and pushes it—hard. At that point, the focus slips from Lydia and Joey and falls far into her childhood and the people she knew then. Is it enough to shatter the novel’s hold or Sullivan’s cleverness in creating it? No, but it leaves cracks in the story’s credibility, leaving it, for me, as a good read instead of a great one.

The Morels
I Liked My Life

Vanessa and her Sister
The Household Spirit

Down and Out in Paradise