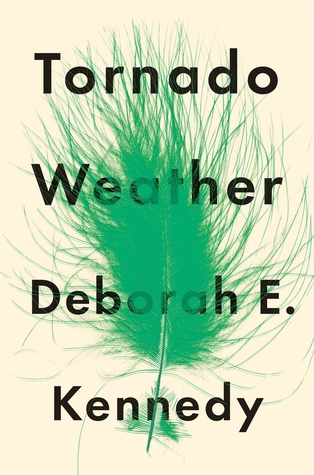 The town is Colliersville, Indiana, but it could be any number of small towns scattered across the United States. Towns where, as the jobs get smaller, the economic disparity gets bigger. This is where Deborah Kennedy chooses to set her debut novel, Tornado Weather and it’s the epitome of the tinderbox that is America right now. It’s a greedy dairy farmer who, in an effort to increase profits has fired all his longtime employees replacing them with illegal Mexican workers. It’s a five-year-old girl in a wheelchair going missing after school. Men setting up militias and armories on their property. A laundromat owner who puts up a No Mexicens sign in the window. School lunch ladies, hair salon owners, a teenager who is ready to stop being Wally and become Willa and one who goes to Iraq.

Much like Sara Taylor’s The Shore (another novel I loved) Tornado Weather is a novel formatted as a series of short stories. This can go very wrong and feel disjointed, but Kennedy has impeccable timing in linking each chapter. A new character emerges, seemingly unrelated to anyone else, but just as it starts to get twitchy there is a sentence that brings a blink of recognition at the connection. And, in the same way a tornado gathers with tightening force she layers these stories and characters to increase their impact. But while The Shore spanned decades to tell its tale Tornado Weather only lasts for the three short months of tornado season. In that time Yoder Dairy will be shut down by the Feds, its workers dispersed to jobs even less palatable and the mystery of Daisy Gonzalez will be solved.

Gritty and dark, this is the middle America we don’t want to think about. Most of the characters live in some kind of poverty, not at the level of destitution but at the level that breeds hate. A lot of it and against anything that isn’t familiar and can be blamed for being poor. Forget the drinking and drugs and the inability to hold a job, Tornado Weather is filled with the kind of men who hate out of all proportion for their own failures. They don’t want the jobs the Mexicans are taking but they will still blame them. This hate could sink the novel, but Kennedy balances it with enough fortitude, pathos and humor to give the reader a well-wrought portrait of a place and people that are not unknown to any of us. We may not like it, but we know it.

For some, the fact that Daisy does not remain the focus throughout the novel will be problematic, but she isn’t meant to be any more than a delicate thread. The town is. Colliersville, Indiana—a sad place that once was thriving but is now tired and rundown. Tornado Weather begins with a missing little girl but ends with a town blown apart by forces that have nothing to do with the weather.

Backlist Beauties: Mini-Reviews
All Girls: A Novel by Emily Layden