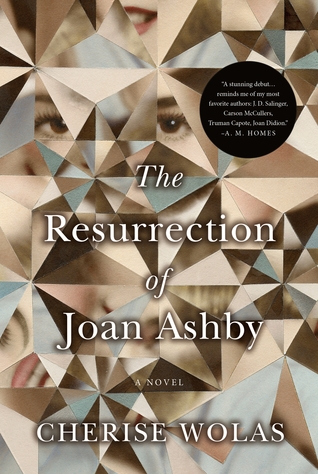 When Joan Ashby is in her early twenties she is acclaimed as a writer to watch. Her short stories win awards, she is interviewed and profiled, and all await her first novel. She knows this is her one true gift and so even when she marries Martin, a man she loves deeply, it is with the agreement that there will be no children. Which is fine until Joan is pregnant. Martin’s joy tempers her concerns and she has the baby, setting aside writing to embrace her new role as best she can. As the years pass another child, another boy is born. Martin’s skill as a pioneering eye surgeon means he travels the world while Joan raises their sons, Daniel and Eric. Using intimate and incisive prose, author Cherise Wolas probes the tender spots of marriage, ambition, parenting, and the sense of self in The Resurrection of Joan Ashby.

In traversing the dynamics of marriage, parenting, and even those between siblings, Wolas covers a vast amount of territory in several decades. As a mother Joan is highly attuned to her sons, especially Daniel, who is like her with his love of writing. Eric is more foreign with a numbers-focused brain that allows him to create a computer app that changes an entire industry—when he is only thirteen.   As Joan sees Daniel putting away his own aptitude for words and striving to fit in in a world that is foreign to him, as he watches his brother explode into the world of computers and coding, allowed to leave school and start running a company—the feeling of impending disaster builds. Or, even worse, the insidious deflation of dreams and aspirations. A feeling Joan knows all too well.

Even when another family member is on stage, Wolas keeps Joan front and center for the reader, painting a portrait on the pages that shifts from the brilliant blooms of a young woman’s success to the muted pastels of a mother’s nurturing of her young to the washed out greys of a woman who no longer acknowledges or feeds her talent. Even her marriage and Martin’s unswerving belief in her greatness is gone as he rebuilds their house with no separate room for her or her work and then turns it over to their young son and his fledgling company. The feeling of loss is profound; the complete subjugation of the artist to the traditional role of mother.

This is how it’s been, she realizes, conditional love all the way through, despite giving him what he wanted right from the start.

Wolas does a beautiful job at extrapolating the life of the artist from the life of the mother and all the attendant sacrifices. There is no doubt that Joan loves her children, but neither is there any doubt that she has given up a vital part of herself to do this work. Wolas is brutally honest in this depiction of a woman who embarks on a journey with a partner, but finds herself navigating the rapids alone while he glides ahead to greater and greater success. In this way, The Resurrection of Joan Ashby is brilliant.

Only after Daniel and Eric have left home to live their lives does there occur a betrayal in the family. One deep enough that it splits the novel into two parts. In part two, Joan goes to India, ostensibly to visit Eric, but more importantly, to try and recapture the person she was before her marriage and children. That person is still critical to her sense of self and she now believes she was wrong to let it go.

This is not an easy transition and ultimately, completely changed my feelings about the book. Throughout The Resurrection of Joan Ashby, Wolas inserts bits and pieces of Joan’s short stories and her works-in-progress, but in the second half of the novel these dominate the novel for pages and pages. All new characters, new lives, no relation to Joan’s story. For some, this may be a bonus, but I found it invasive. I was in invested in Joan’s life and her writing did not reveal anything to me that I needed to know. It was disruptive, snapping the chain of my immersion in the novel. Sadly, the novel-within-a-novel makes up much of the remainder of The Resurrection of Joan Ashby turning the book from one I loved to one that made me feel, once again, that Joan’s life was diminished by someone else’s story.

Be Safe I Love You

The Perfect Mother by Aimee Molloy

Everyone Brave is Forgiven

Love in Case of Emergency
Fear of Dying: A Novel