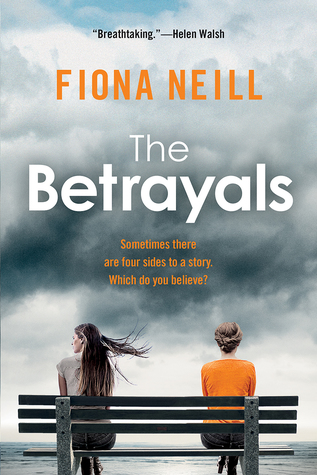 A seemingly happy marriage has cracks that shatter one summer when two families vacation together on the Norfolk coast. Two families with best friends at their center. Rosie and Lisa have known each other since they were teenagers so it was wonderful that their families aligned so well.  Right up until Lisa has an affair with Nick, Rosie’s husband. Suddenly, what was, wasn’t, and a series of events is launched across their lives that continues to have repercussions years later. In The Betrayals Fiona Neill creates a multi-faceted look at one family much like any other, but for whom mistakes, omissions, and misunderstandings lead to greater damage than they ever expected.

Perception is the key to The Betrayals. Rosie, Nick, and their children, Daisy and Max, all have their own chapters, but it quickly becomes apparent that the way they see the family and events is not the same. The novel’s timeline is split between the summer Nick and Rosie divorce and eight years later when the pieces have been imperfectly reassembled. Lost is the friendship between Rosie and Lisa. Daisy and Max are both at university and seem to be doing well. Until Lisa reaches out and intimates that there are things Rosie needs to know. For each member of the family this means something very different but not anything good.

Neill challenges the reader even further with unreliable narrators—the most obvious being, Daisy, who after their father moves out, becomes a person of rituals. Rituals that are necessary to keep her mother and Max safe. At night she unplugs all the appliances, counts the knives, and checks Max’s breathing as he sleeps. After things reach a crisis point, she gets relief from a therapist, but now feels the verbal and physical tics reasserting themselves. Once again, she turns to Max for help but as a man, and not a little boy, he understands that his complicity in keeping her secret ultimately costs her more than it’s worth.

In case you missed it, I’m not a fan of plot overload. On the surface, The Betrayals would seem to qualify: a narrator with severe OCD, a philandering husband, a cheating best friend, young love, teenage girl bitchery—it’s all there. BUT…Neill titrates the drama dose so carefully that the novel doesn’t overdose. Rather, it’s addicting. In a world that can feel black and white, Neill covers the spectrum of gray with each of the many shades impacting not just the individual, but everyone around them as well. It’s not just about infidelity, betrayal, or mental health, it’s about all of them and in Neill’s hand The Betrayals is incisive, compulsive reading.

Alice in Bed: A Novel

The Shore: A Novel by Sara Taylor

The Grammarians by Cathleen Schine
How I Became a North Korean