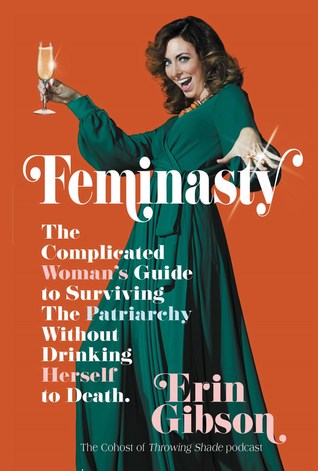 It’s difficult to imagine a book that could make me laugh out loud and feel enraged at the same time, but Erin Gibson’s Feminasty did just that. It might help to know that the subtitle of the book is: The Complicated Woman’s Guide to Surviving the Patriarchy Without Drinking Herself to Death. Which is all I need to see to know that this is likely to be a book I’ll love. And it was. Gibson doesn’t hold back as she takes on all of the issues about the patriarchy that make her stabby.

If Gibson were just regurgitating well-worn facts (like the pay gap) about how women are kept down Feminasty would get old fast. Instead, she crashes into areas I never even considered. Like tampons. You know, the item that virtually every woman goes through thousands of between 13 and 50—and pays whatever price is charged because staying home in bed with a towel stuffed between your legs for 6 days is not a realistic option? I didn’t know that in 38 states tampons are not considered a “medical necessity” and so are taxed, while dandruff shampoo and condoms (to name just a few items) are not. Excuse me?! How is something that stops the flow of BLOOD not a necessity? Unfortunately, it’s a $15 billion-dollar industry, with states like California pulling in $20 million in tampon tax annually, so there are no male politicians willing to get behind bills to eliminate it.

Love make-up? Thrill to see a new skincare product? It used to be that women, like Elizabeth Arden and Estee Lauder, ran the cosmetics industry. Now, men own and run both, as they do virtually every other cosmetics company out there. What do men know about make-up? Unless they’re drag queens, because those ladies know make-up better than most of us and I adore them. The good news is that Gibson doesn’t just complain about this situation—she offers the names of cosmetics/skincare companies run by women.

Two simple issues that affect every woman every day aside, Feminasty also goes all the way to the top and takes down Mike Pence for his women-hating beliefs and writes a letter to Betsy DeVos about removing Obama’s campus rape guidelines:

Look, I get it, you’re very wealthy and detached, and you’d probably rather be at a gala right now. Politics is hard and requires so much reading of things that aren’t the Bible…The problem is information. Though the mere mention of the word makes your already exhausted neurons work triple-time, hear me out. The sad fact is, while we’re drowning in studies on why women are the victims of sex crimes, we’ve got a limited few on why men commit the crimes. So, it’s understandable why someone like you would be so confused by rape statistics.

Funny and rude, yes, but Gibson also includes the statistic that by age 16 a girl’s chances of being raped are 20%. By the time she gets to college they go up to 60%. 60%. That’s not funny.

In case you’re thinking that Feminasty only goes after the current president’s cabinet for their misogynistic actions, chew on this: George W. Bush ushered in federally funded abstinence-only education, which is now taught in high schools and community centers across the country. Over $2 billion has been spent so far and it goes largely to religious organizations and ‘teachers’ with no credentials beyond walking upright. And if you’re wondering how well this $2 billion is doing in preventing teen pregnancies know that a 2017 study showed 30% of female abstinence pledge takers get pregnant, compared with the national average of 18%.

Are you riled up yet? If not, there are a lot more chapters left. Chapters in which Gibson riffs on the #MeToo movement and how women get pitted against women. It’s all couched in humor, but it’s worth noting—Gibson’s humor is filthy. Absolutely profane and vulgar and sometimes off-putting. Something to consider if you’re thinking of the book as a gift idea to educate your mother on why feminism is not a bad thing. But if you think Feminasty is just foul-mouthed, stand-up comedy material, you’re wrong. She may make me cringe at times, but Gibson backs up everything in the book with data and facts—which is the point. We need to be educated and informed. One, so we don’t sink into alcoholic despair and two, to derail the patriarchal train.

Ill Will: A Novel by Dan Chaon

In Search of the Perfect Loaf

Dopesick: Dealers, Doctors, and the Drug Company that Addicted America