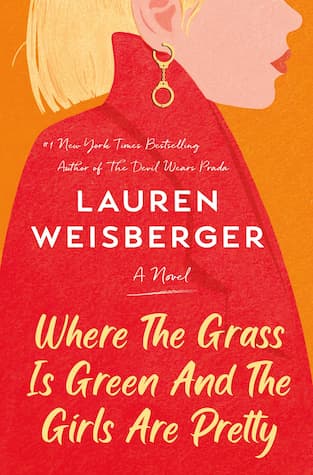 Where the Grass Is Green and the Girls Are Pretty by Lauren Weisberger
Published by Random House
Publication date: May 18, 2021
Genres: Fiction, Chick Lit, Contemporary, Social Issues

It was only a matter of time before the Ivy League college admissions scandal was memorialized in fiction. I was happy to see that the first responder is a favorite contemporary chronicler, Lauren Weisberger, of The Devil Wears Prada fame. She’s back with Where the Grass is Green and the Girls Are Pretty and it’s exactly what you’d expect from a world where entitled white people game the system to get their children into colleges they’re not qualified to attend.

Peyton is a famous morning news show anchor who’s on the fast track for prime time. She and her husband Isaac have a teenage daughter, Max, who’s been accepted to Isaac’s alma mater, Princeton. Peyton has a sister named Skye who’s devoted her life to educating girls, teaching first in Africa and then in Harlem. When she and her husband adopted a baby girl and his career as an architect took off they moved to the suburbs outside NYC where she’s no longer teaching, but trying to stay sane in the world of wealthy mommies.

Peyton is blindsided when the news breaks that her husband has been arrested in the 2nd round of parents bribing college officials to get their children admitted. By the time she can react, the network has ‘suggested’ she take a break for the summer, her daughter has found out, and her husband is in jail. Things keep getting worse, as Skye was building a boarding house in her neighborhood for underprivileged girls from poorer districts so they could attend the schools in her district. The investor was a colleague of Isaac’s and he pulls out to avoid any potentially bad publicity.

Weisberger covers a lot of territory in Where the Grass is Green. One, Peyton doesn’t really understand the fuss. It was a donation check, who cares? Two, on a deeper level, Max had the grades and test scores to get into Princeton, a school she was only marginally interested in as her love is film making. Now, she’s humiliated at her school and in the world and her admission has been revoked. Her father’s perceived lack of faith in her destroys their relationship. Then there is the media world. Peyton goes from calling the shots in her career to being iced out by all of her colleagues. She has to leave the city to avoid the press.

Where the Grass is Green is entertaining, but fairly superficial. What inched the novel towards great is a twisty twist early on that permeates every page from that point forward. All in all, solid summer reading of the kind you’ll dive into, enjoy, and forget after you’ve finished.

*I received a free copy of this book from Random House in exchange for an honest review.*

Touch: A Novel by Courtney Maum

A Lady’s Guide to Selling Out