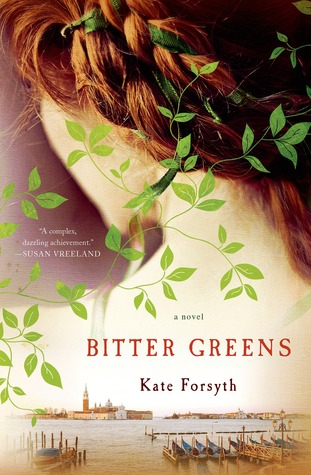 Charlotte-Rose de la Force is a most unfortunate woman for her times. Unmarried and subject to whims of Louis XIV she has provoked his ire once too often with her acerbic writings about the Church and has now been consigned to a nunnery. For a woman who loves her fine silk dresses and elegantly styled hair to be shut away, wearing burlap with shorn hair and no writing utensils is a fate almost worse than death. But, at the abbey she meets an unusual nun who uses their time working in the garden together to spin a wonderful tale and leads us into Kate Forsyth’s new novel, Bitter Greens. Charlotte-Rose was a real woman and the original author of the fairy tale Rapunzel. In Bitter Greens, Forsyth combines the details of Charlotte-Rose’s life with those of a young girl named Margherita and a courtesan known as La Strega Bella.

Margherita is the character most of us know as Rapunzel and Forsyth follows her story fairly carefully—foolish promise made by parents to a witch who takes her away as a young girl and imprisons her in a tower. Forsyth then plies her own imagination to add details to the story including how the hair came to be and why the witch wants Margherita so desperately. Her vivid imagination also creates Selena, La Strega Bella, a beautiful young woman who apprentices herself to an herbalist who also works with the occult. She becomes a courtesan and when necessity prevails, begins to use the dark arts, and eventually becomes the witch who kidnaps Margherita.

In Bitter Greens Forsyth braids these stories of one woman and two fairy tale characters into one thick novel that fascinates from a historical perspective and appeals because of the high drama of the fairy tale. The only drawback—as Margherita found with the bulk of 100’ of hair attached to her head—is that there is so much going on that it can be hard to manage. Keeping track of who/what is real and what is the tale being spun is made more difficult because in the chapters about Charlotte-Rose Forsyth is careful to emulate the French aristocracy’s delight in announcing their full lineage to anyone who asks. Additionally, the court of the Sun King was rife with intrigue which Forsyth includes in Charlotte-Rose’s story but in doing makes it feel as if her life was more than enough for a novel by itself. Still, for lovers of historical fiction Forsyth’s re-creation of the golden days of French history is filled with behind-the-tapestries intrigue. For those with a magical bent the reworking of an age old fairy tale with maidens, witches, evil spells and handsome princes—all with slightly modern attitudes—will be a welcome beginning to the kind of reading needed for the cold, rainy weather of fall.

I received a copy of this book from Thomas Dunne Books as part of Historical Fiction Virtual Book Tours. To see the tour schedule click here. 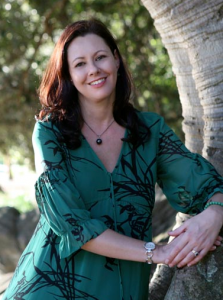 Kate Forsyth, award-winning author of thirty books for both adults and children, was voted one of Australia’s Favourite 20 Novelists, and is an accredited master storyteller with the Australian Guild of Storytellers.

Her recent novel, ‘The Wild Girl’, is the true love story of Wilhelm Grimm and Dortchen Wild, the young woman who told him many of the world’s most famous fairy tales. It was named the Most Memorable Love Story of 2013. ‘Bitter Greens’ has been nominated for a Norma K. Hemming Award, the Aurealis Award for Best Fantasy Fiction, and a Ditmar Award.

Kate’s books have been published in 14 countries. She lives in Sydney, Australia, with her family and many thousands of books.

The Last Painting of Sara de Vos: A Novel

The Holdout: A Novel by Graham Moore

In Every Mirror She’s Black