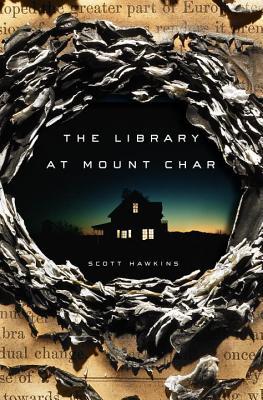 When Carolyn was eight, she and a number of her neighborhood friends lost their homes and families and were subsequently adopted by a man they called Father. And that’s as normal as Scott Hawkins’ debut novel The Library at Mount Char gets. The rest is a story that is wildly, imaginatively over-the-top good. You see it turns out that Father has been around for possibly 60,000 years and he’s not fatherly at all. Rather, he adopts Carolyn and her eleven friends to teach them his culture and ways from twelve catalogs of knowledge in a library so vast it seems to have no end. They still live in their old neighborhood but it and the house they inhabit are not really of this world. Instead, they are creations of Father and when he goes missing things get very scary indeed.

The novel opens when Carolyn is around thirty. She and her ‘siblings’ have spent the decades learning from one catalog of knowledge each and only one, so that while they may be adept in one area they do not have enough power to overthrow Father on their own. Hers is all languages while some of the others have been studying animals, death, mathematics, healing/resurrection, and murder/war. Now that Father is missing, there is fear amongst them that another supernatural master has murdered him and will move against them in order to take over the Library and all the knowledge it contains. The Library, which has, with Father’s disappearance, become inaccessible to them, leaving them more vulnerable to attack. As the only one who interacts with the real world it is left to Carolyn to find a way to enlist an American (as they call people not like themselves) to unlock the defenses that now keep them out of the Library.

And that’s about as much of the plot as I can share without making you fear for my sanity or wonder if I’ve found a stash of LSD. What I can state with certainty is that like Slade House, the Monday review that led off my reading scarefest, The Library at Mount Char is not a novel you will put down. Where Slade House used elegant prose to exert a cerebral lure that made you want to keep reading, Mount Char is not so demure. The sheer magnitude of Hawkins’ creative mind means there is a magnetic pull to the book’s pages. And if the gore and violence gets to be a bit much (ribbons of intestines really freak me out) they are counterbalanced by the humor and the delicious improbability of plot twists that left me reeling with delight and surprise. Somehow, this novel invokes a childlike glee, with a world populated by characters who are human, but through learning have acquired skills allowing them to communicate with every form of animal life, heal any disease or injury, and speak every language ever spoken at any time in history anywhere. If it also means knowing how to kill and to recover from death in every manner possible, well, it’s just part of gross, intelligent, mayhem and addictive reading. Bottom line? The Library at Mount Char is the answer to every booklover’s prayer that they have not already read everything new under the sun, because there is nothing like this book. It is that ingenious in its premise and execution. It may not be to everyone’s taste, but oh, I loved this book.

In the Blood: A Novel
Coming to My Senses: A Story of Perfume, Pleasure, and an Unlikely Bride