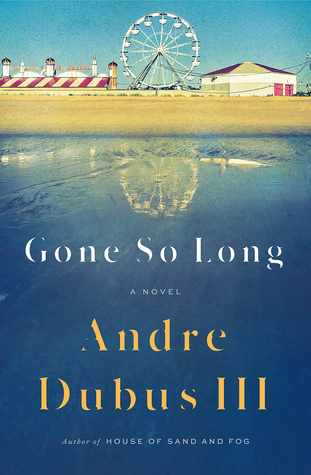 Gone So Long is both the title and the main situation in this new novel from Andre DuBus III. Daniel Ahearn is dying of cancer. He lives a quiet life alone in a small New England town and works repairing fine furniture. Before he dies he is determined to find his daughter, whom he hasn’t seen in 40 years. Twenty-five of those years were spent in prison for murdering his wife, Linda, in front of the three-year-old Susan. Susan, who was taken away and raised by, Lois, Linda’s mother. A woman for whom neither forgiveness or forgetting is possible. In his inimitable style with this damaged cast Dubus brings three people to life on the page in a novel that reverberates with quiet pain.

Before I go any further you need to know: this is not a thriller. There is no re-enactment of Daniel’s brutal murder of his wife. There’s no hunt, no questions to be answered. Daniel was an impulsive 23-year-old obsessed with his wife and insecure about her beauty. He makes no excuses, but he hopes he can make his daughter understand him, not forgive him. He knows that’s impossible. While Daniel’s is a life of acceptance, both Lois and Susan struggle mightily with the family’s past. Lois didn’t tell Susan the truth about her parents until she went to college and it sent her into a tailspin of destructive behavior with men. She cheats and leaves for most of her adult life. And Lois is now in her sixties, living in Florida, and still burns with a palpable anger. Everything and everyone makes her furious.

Gone So Long is not a dramatic novel of huge events. It is a novel of small people with small lives, with the exception of one catastrophic event. Dubus’s focus on and care of his characters makes for poignant reading. The only piece of introspection that became difficult for me were the large sections he devotes to Susan’s autobiographical writing. I understand it was a process she needed, but its contribution to the novel was lost on me. I felt the themes of forgiveness and regret were more important—as in, does Susan owe her father anything? Does Daniel have any right to enter her life again?

This kind of inner questioning is where Dubus shines as a writer. He probes the most painful parts of life with the care of a surgeon, laying open the wound, using compassion to bring understanding and possibly, healing. Which is not to say that Gone So Long is a novel of reconciliation and happy endings. It can’t be and Dubus knows better than to try and make it so. Instead, with beautiful, elegiac prose we see Daniel, Lois, and Susan in all their sadness, hope, and shame—their most uncomfortable of emotions. In doing so, Dubus opens the door for the reader, ushering in recognition and making room for insight into lives that are not really so different from our own.

The Beauty of Your Face

Mrs. Everything by Jennifer Weiner