It’s only mid-May, but spring training is winding down for book bloggers and it’s almost time for the dog days of summer when reading can be hit or miss. The good news is that while summer used to be largely ignored by publishers, there are more new release options than ever. Plenty of these are getting a lot of attention so I’m sharing the smaller books I can’t wait to read. Get ready to stock your TBR!

I have 42 books lined up to read from June to August, which is why this post is in two parts.  Four books today and four more on Friday. 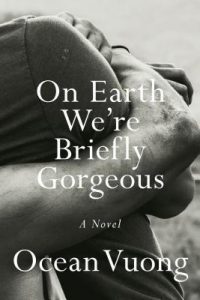 (6/4, Penguin) I’m not reading a lot of fiction about men these days but On Earth We’re Briefly Gorgeous caught my eye because it’s a debut and it’s set in Vietnam. We just finished watching Ken Burns’ Vietnam War documentary and I’m still trying to wrap my mind around how our country was misled for so long and how we learned nothing from it, but have pursued two more wars where we did not belong and again have a president who thinks nothing of abusing his powers and the Constitution.

That said, this cover and the title give me a A Little Life vibe so I’m hopeful this will be something less violent, but just as immersive. It’s the story of a son writing a letter to his mother. A letter that becomes a gateway to the past. Sounds like it could be literary fiction at its best.

(June 25, Ecco) The Gone Deadby Chanelle Benz  falls in my sweet spot of debut and female author. It’s the story of a young woman who inherits her family’s cabin in Mississippi and returns home after 30 years away. Her father was a poet who died mysteriously when she was child and now rumors resurface about his death. It’s being described as gritty—which I’m realizing is a dog whistle for me because it always brings me in. Plus, George Saunders blurbed it and while I can be leery of blurbs I trust him.

(June 25, Algonquin Books) Somehow, disappearing sisters are a big thing in fiction right now. Earlier this month there was Disappearing Earth which is set in Russia and now, from Australia there’s The Van Apfel Girls are Gone. It looks to be more of a straight forward mystery which will be welcome as Disappearing Earth did not come together for me. Still, it also has a coming-of-age element, with an 11-year-old narrator, and is said to be quirky—an adjective that always draws me in.

(July 7/2, Random House) Caite Dolan-Leach’s debut novel, Dead Letters, was easily one of the best psychological thrillers I’ve ever read. Like ‘I would read it again’ good—and I don’t re-read books. So, when I saw she has a new novel coming out I was extremely excited. We Went to the Woods  doesn’t look to be a mystery—which could be good, because I can’t compare it to Dead Letters or bad because she’s a one trick pony. Still, the plot sounds promising: the world is getting increasingly unsafe in every way so five NYC friends decide to go off-the-grid on a farm in upstate New York. What could wrong? My guess is everything and I’m ready for what I hope will be riveting reading.

As if two posts to talk about summer reading weren’t enough, I was lucky enough to be on the Sarah’s Book Shelves Live podcast again, chatting about even more book recommendations for summer. As always we have fun (and get snarky), so you should have a listen! You can find the episode anywhere you get your podcasts. Or just click on image below.

Nonfiction November: My Year in Nonfiction

A Month of Favorites: This is How I Read
Nirvana or Nightmare?