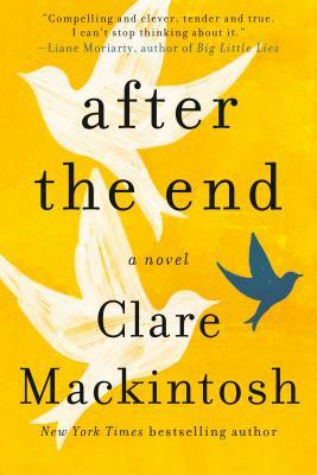 There are many unimaginable things in life, but one of the worst is being the parent of a dying child. Max and Pip are a couple in love who adore their son Dylan. He’s a happy child, but developmentally a bit slow—he doesn’t talk much and falls down more than most children. Shortly before his third birthday they learn he has a brain tumor. A tumor that’s been causing the damage and when removed causes more. Even worse, it has continued to grow. Their little boy is paralyzed from the neck down and unable to communicate. His condition is deemed terminal and the doctors recommend palliative care only. But it is up to Pip and Max to decide for their little boy. This is Clare Mackintosh’s heartfelt, thought provoking novel, After the End.

It’s not a spoiler to say that Max and Pip differ on what to do for Dylan. In the early chapters of the book, this difference is taken to the courts because the hospital where Dylan is being treated agrees with only one of them. The other parent fights. Quickly enough, there is a decision and from there, Mackintosh splits the novel into two realities with chapters in either Pip’s or Max’s perspective. It makes After the End the ultimate ‘what-if’ novel. It also makes for reading that requires a lot of attention because there is more than one thread to follow. It’s easily given, because what is happening is so compelling, but this is not a book to skim through.

I don’t generally issue caveats about books, but this one has some extremely tough moments. Not physically gruesome, but emotionally. I’ve never been a parent but there were at least two scenes when I felt as if I had been punched in the stomach. It’s to her credit that Mackintosh not only painstakingly relays medical and legal information, but gives the same care to the deeply human aspects of After the End. Even if you enter the novel with staunch opinions on sustaining life or death-with-dignity, she honors each and every emotion. Which makes for heartbreaking reading. Her attention to detail and ensuring that the narratives stay realistic works until the novel’s conclusion.

This means: I’m not sure how it ends. Which, as I thought about it, may be what Mackintosh intended. Max and Pip had an excruciating decision to make. When they differed on what to do for their son it became a public nightmare with both having vicious advocates on their side. The what-if narrative is for our benefit, not theirs. Maybe the point of After the End is it’s no one’s business how this story about a terminally ill, beloved child truly ends.

Leave the World Behind

It’s Memorial Day: What Are You Reading?

This is Between Us