I’m sure you’re all tired of hearing my astonishment over my nonfiction reading, but honestly, this is the first time in all my years of blogging where I have 3 5-star nonfiction books before the year is even over. And this is just from the last two months! I’m not going to bore you (yet!) with my thoughts on why this is so, but get right to it, with two more  nonfiction books I recently enjoyed.

Author Helena Dea Bala was a lobbyist in Washington D.C. when she took a moment to talk to a homeless man near her office. Their conversation made her feel better and seemed to help him, leaving her to wonder: What would you tell a stranger if you knew it would never get back to anyone you know? This led her to post an ad on Craigslist offering to meet with people anonymously and let them share their stories. The response was huge and the result was the 40 stories in Craigslist Confessional.

In one way, Craigslist Confessional is a book well-suited to our time of social distancing and isolation because it’s about connecting with other humans. The stories cover a wide spectrum of people—from a middle-aged transgender man who has no hope of rebuilding his life after wife dies to a 65-year-old man who’s lost everything in his life due to his lifelong battle with depression. What I appreciated about the book were the stories that challenged my worldview, such as one about a stay-at-home dad who feels unappreciated by his wife. My initial response was that he was whining until he admitted he probably was the same way when he worked and she stayed home. He acknowledges

I guess it’s one of those things that has to be lived in order to be understood.

Exactly. That’s probably the best lesson of this book.

The downside of Craigslist Confessional is the other side of the connection coin—this is a book steeped in sadness. The main emotions are loneliness, regret, loss, or fear. It’s understandable—happy things are easily shared with people we know, but it means I had to set the book aside several times. It dragged me down and, at a time when staying upbeat (or at least somewhat balanced), is no easy feat it required a positive mindset that is hard to maintain.

*I received a free copy of this book from Gallery Books in exchange for an honest review.* 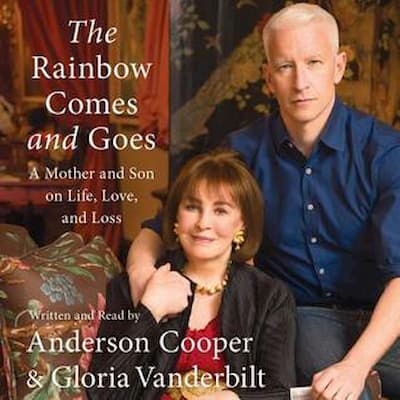 The Rainbow Comes and Goes: A Mother and Son on Life, Love, and Loss by Anderson Cooper, Gloria Vanderbilt
Published by HarperAudio
Publication date: April 5, 2016

Last month I read wonderful historical fiction about Teresa Vanderbilt (The Woman Before Wallis) and it piqued my interest about her niece, Gloria, who was the subject of an intense custody battle thanks to her family’s millions. In the novel the 10-year-old Gloria turns viciously on her mother and I wondered what that time was really like for her. Thankfully, Vanderbilt and her son, Anderson Cooper, collaborated on The Rainbow Comes and Goes about their experiences with life and loss. I listened to the book and the contrast between Cooper’s more reserved voice and Vanderbilt’s lighter, more emotive tone is charming and gives the book its poignancy. Vanderbilt does recall the years of her childhood and how her mind was twisted against her mother. She also acknowledges that the same mistakes her mother made—marrying while a teen and having a child while very young—were mistakes she went on to make herself.

I thoroughly enjoyed listening to Vanderbilt reminisce, even if her life sounds fantastical, like a 1950s Hollywood movie. A young woman who never had to think about money in her life, moving in social circles that included famous artists, celebrities, and entertainers, marrying and divorcing, trying on and shedding creative careers on after the other. It sounds frivolous on paper and Vanderbilt doesn’t deny the privilege of her life. What she does do is talk about the very real tragedies she suffered and how she found her way through them.

Cooper is the perfect counterpoint to his mother. He is firmly grounded in facts and reality, with little patience for more ethereal beliefs in how the world works. At times he sounds frustrated with his mother’s airy attitude towards life, but there is always a deep undercurrent of love in their dialogues. He’s not the focus of the book, but the suicide of his older brother (Carter Cooper killed himself in front of Gloria) is the dark point that irrevocably changed both their lives. This is a tender book between mother and son that, beneath all the glitz, is about surviving unspeakable tragedy.

The Year of the Horses: A Memoir

The Mare: A Novel
Hunters in the Dark

Boo: A Novel
The Book of Speculation