How Should a Person Be? by Sheila Heti
Published by House of Anansi Press
Publication date: September 25th 2010
Genres: Contemporary, Fiction, Literary 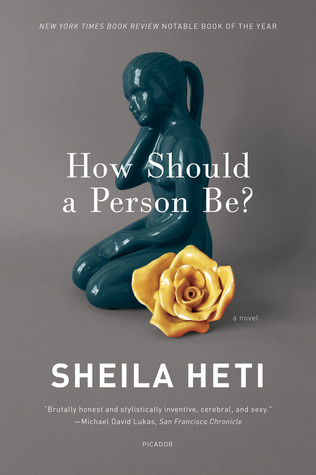 How Should a Person Be? is the new novel by author Sheila Heti, asking the same question. The novel’s Sheila is an aspiring playwright trying to find her place in the world. It’s her belief that everyone around her already knows how to be and so does not struggle the way she does. Initially, she believes fame is what she wants but on her own terms.

By a simple life, I mean a life of undying fame that I don’t have to participate in. I don’t want anything to change, except to be as famous as one can be, but without that changing anything.

Heti frames Sheila’s question in the worlds of female friendship and the artistic life. Sheila becomes friends with Margaux, a painter. Their dance, from strangers to friends, is as stilted, awkward and beautiful as any new friendship. In trying to answer her question through her art, Sheila asks Margaux if she can record their conversations for her play and although Margaux agrees, it causes a rift between them. Only later, when they’ve reconnected does Margaux decide that maybe Sheila’s idea is good.

Yes! And I want it to answer your question—about how a person should be—so that you never have to think about it anymore. So that whatever you do from that point on isn’t about that question, and so our friendship won’t be either.

How Should a Person Be? is experimental in its format and narrative. Sheila wants to write a play that will answer her question and upon finishing the book, the reader is likely to realize that it has been set-up as four acts and an intermission. The novel is the play. But while such a lofty goal as deciding how a person should be could make for ponderous prose Sheila’s narrative, with its lists and emails, is oddly light. She and her friends are aware of the preciousness of their chosen fields and hold Ugly Painting contests or ponder how famous artists makes it work.

How can these artists we read about—who have been married five or six times—how can they have enough time for all that life, and also make art?

And have a heroin addiction?

The book flows in a way that allows it to move into the reader with very little effort on their part, making it much more easily felt than explained. The only scenario that did not work for me was the affair between Israel and Sheila. Like many contemporary authors Heti utilizes hyper-sexualized scenes and the kind of profanity that sets my teeth on edge (sorry, I just don’t find the c-word empowering). Is it a marker to define the work as contemporary? Or is it how sex is now viewed by modern women? I have no idea but the elements of degradation and sexual humiliation between Israel and Sheila were simply too raw and painful. I do not equate being treated badly with self-actualization. Thankfully, this is the only element of the book that jars and is not enough to interrupt the loose, free-floating nature of Heti’s prose.

Ultimately, this unusual book is a Rorschach test, in that each reader will see something different and what they see defines them and not the author. It is a highly personal work on Heti’s part, a mix of fiction and philosophy, but done in a way so subtle, the reader is not led but leads themselves to a meaning. I found it calming, in that it flowed and I flowed along with it. There was no sense of urgency to interpret what I was reading and yet, I understood. For others, the aspects I found to be most positive and powerful will read as jangled and discordant but, opinions aside, this is not a book that should be ignored. It will get in your head and shake you up, making you wonder ‘how should a person be?’

How could I castrate my mind—neuter it!—and build up a resistance to know what was mine from what was everyone else’s, and finally be in the world in my own way?

How Should a Person Be? may be purchased at:

What I’m Reading this Week

The Arsonists’ City by Hala Alyan
Mr. and Mrs. Doctor