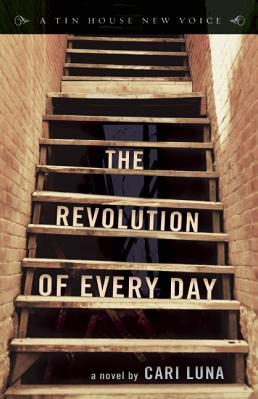 By the mid-1980s there was an entire subsection of lower Manhattan that had been abandoned by the city. Landlords had neglected their buildings, tenants left, and the underworld took over. It was about this time that a small group of people began to reclaim buildings that were empty and close to demolition. They were known as squatters because they moved in but paid no rent. In many cases they were drug users and homeless, simply looking for a place to get high and to sleep but in Cari Luna’s debut novel The Revolution of Every Day, we meet 5 adults who have reclaimed two buildings and created a community. Some have jobs while the rest are artisans and activists but while they may not be able to earn a living in Manhattan they are determined to make a life. They restore the buildings using only materials that have been thrown away at other construction sites and get the majority of their food from what has been discarded at grocery stores and restaurants, much of which is undamaged.

The stories of Anne, Steve, Gerrit, Amelia, and Cat begin at the point where the city has noticed their efforts and is beginning the work of evicting them and demolishing the buildings. On a micro level, within their community, events are also conspiring to split them apart. Amelia and Gerrit have lived together for seven years but Amelia is now pregnant and it is not Gerrit’s baby. Steve is married to Anne, who has a paying job and is no longer certain she wants to be a part of this lifestyle.

It isn’t like that anymore. Either he’s gone small or Anne has grown too large to be contained; when he holds her now, she sees only what’s beyond him, waiting over his shoulder. He holds her and she feels the wind and the encroaching dark. He is neither the city nor the home that shelters her from it.

The Revolution of Every Day is permeated with the quiet of humanity. There are no large and grand gestures every day, just a desire to fulfill basic needs and have a home. Squatters is the commonly used term but these people are not squatting, they’re settling and putting in long days and months of free labor to revitalize a neighborhood. Unfortunately, as the turmoil grows outside their home so it does inside as well. Each character has their own story carefully coaxed out and we come to see that in their lives they were treated much like the buildings they live in: abused, neglected, abandoned. In creating their community they have renewed themselves. But do these changes go down to the foundations? For Cat, the matriarch of the second building, the answer is not that clear. She kicked a long-term heroin addiction but this battle may call upon strength she no longer has. At what cost to fight?

It’s been so long since Cat felt what it was like to be Carolyn that it might as well be a stranger’s name—some girl dead and buried, someone she caught a glimpse of once or twice in the mirror before she lost her for good.

Luna’s prose meshes seamless with the story. In the same way that these people waste nothing and get the most out of the least, she writes with simplicity and strength. There are no extra words and embellishment is unnecessary. I was reminded of Kent Haruf’s Benediction, which is as beautiful as still water. There is nothing still about Revolution—the city and the people are constantly moving for survival—but there is a beauty and integrity to their collective effort. It plays out even as the group begins to splinter and while only some individuals have the strength to survive, the spirit of what they accomplished together remains alive.

In Sunlight and In Shadow

The Lake House
The Summer Guest

Stay With Me by Ayobami Adebayo

A Prayer for Travelers