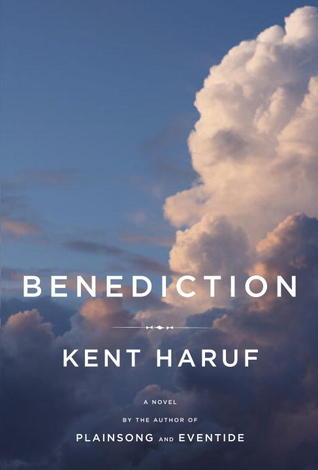 Yes. You know how much they think of you.

You don’t let people, Daddy. You never have.

You think that’s what it is?

Well. I don’t know about that. I couldn’t say.

-Lorraine speaking to her father

It is the beginning of summer but the end of Dad Lewis’ life. As per his doctor, he is unlikely to see the end of the summer and all that is left is to manage the pain. He returns to his home with his wife Mary and so begins Kent Haruf’s luminous book, Benediction.

With Dad as the hub, Benediction looks at the lives that circle his in the small town of Holt, Colorado. His daughter, Lorraine, comes home from Denver, and moves back in to help her mother with his care and to spend time with him. Next door, his neighbor Berta May’s eight-year-old granddaughter, Alice, has moved in with her after her mother’s death from breast cancer. Willa Johnson is an elderly widow who lives with her middle-aged daughter, Alene, whose romantic life never progressed beyond a short affair with a married principal while she was a teacher. Finally, there is pastor Rob Lyle, his wife and teenage son. Lyle has been transferred to Holt from Denver under circumstances that cause much speculation but are never explained.

With prose that is as simple and straightforward as the town of Holt itself, Haruf creates a deeply touching novel. It is not that life is simple because, as evidenced by the characters, it is not. For Dad and Mary there is their son, Frank, from whom they are so completely estranged there is no way to even let him know his father is dying. Instead, Dad is left to talk with him in morphine induced hallucinations. As summer passes and Dad’s life wanes we are drawn more deeply into the hearts of the characters: Berta May adjusting to an eight-year-old child in her home, Alice dealing with the grief of her mother’s death and surrounded only by old people, Mary watching her strong proud husband waste away, and Pastor Lyle trying to reach his congregation with words from his heart. Quietly and with a minimum of fuss they struggle to adapt to life as it is now while letting go of what it was.

Benediction is a deep, clear, still pool of water. There are no frills or extra sentences, every word is exactly as it should be and each will resonate within the reader. There’s no mystery or grand ending, huge scenes or other dramatics. There are people trying to figure out life and death and how to make the most of both. As Pastor Lyle tries to explain to a policeman who has stopped him on his nightly stroll to ask what he’s looking at, it is nothing more than

People in their houses at night. These ordinary lives. Passing without their knowing it. I’d hoped to recapture something.

The officer stared at him.

When These Mountains Burn

Know My Name by Chanel Miller

Life from Scratch: a memoir of food, family, and forgiveness
Miracle Creek by Angie Kim