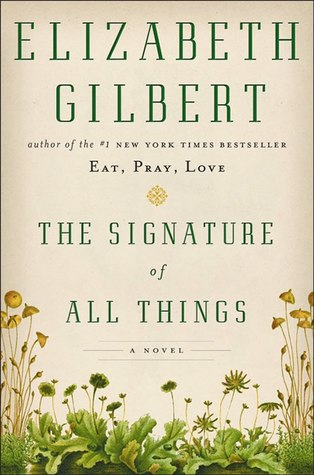 Elizabeth Gilbert is back after her foray into relationships in Eat Pray Love and Committed, with a new work of fiction called The Signature of All Things. The novel is a family saga that spans generations and continents.

Gilbert begins with Henry Whittaker, Alma’s father and a man who fell into his field through stealing plant specimens from one of England’s greatest naturalists, Sir Joseph Banks. When caught he’s given a choice between sailing around the world as a botanical collector or being hanged as a thief. For three years, he lives an ascetic, grueling life of long sea voyages, harsh weather, and hostile natives in order to fulfill his contract with Sir Banks and to win the man’s esteem. When he returns and it is apparent Banks views him no differently than he did when he was a 17-year-old thief he discards his dream of being a gentleman.

Whatever youth had remained in him as of that morning, it was now kicked out dead. From that point forward, his life would not be about who he could become, but about what he could acquire.

Banks goes from being an idol to being someone Whittaker will spend his life trying to best. He leaves England and goes to America to make his fortune there. Along the way he procures a wife in Holland from one of the most prestigious families in the horticultural world. Beatrix understands his passion to succeed and brings her own ambitions with a fearsome work ethic. After several miscarriages, their only child Alma is born with “a face like a bowl of porridge, and was pale as a painted floor.” Not an auspicious beginning but Alma still blossoms into the most interesting of characters—a strong willed, strong minded, highly intelligent woman about whom one wants to continue reading.

Never a shrinking violet Gilbert lets loose her imagination and creates a story that feels earthy and real while at the same time reads like a fable or myth. Part of Alma’s journey is into the sexual awakening of her body. An intensely cerebral woman at a time when sexuality in women was not thought to exist much less be discussed, Alma becomes her own teacher.  For some the sensual nature of plants leads easily into the sensual nature of the body but for others Alma’s sexual thoughts and scenes may feel extraneous in a character who is already so fully formed and fascinating.

The fairy tale aspects appear when Alma meets and falls in love with Ambrose. Like a Prince Charming he awakens her emotions and reciprocates her passion for the natural world. After dedicating her life to her father she believes that at the late age of forty-nine love has finally found her. They marry and she soon discovers that the love of Ambrose is limited to the spiritual realm and in her broken-hearted rage she banishes him to Tahiti to grow vanilla for her father’s company.

But Alma thought it would kill her, this profundity of sorrow. She could not sound out the bottom of it. She had been sinking into it for more than a year and a half, and feared she would sink forevermore.

Years pass and the loneliness becomes grief in 1850 when Alma is informed of his death. The return of some of his belongings sends her on an odyssey to discover the truth about this man she loved so dearly but knew so little.

The Signature of All Things is an extraordinary novel filled with details and characters as lush and vibrant as the plants Alma loves. Gilbert lovingly tends the soil that is Alma and her scientific mind fighting against her passionate nature. It is a bold undertaking about botany but goes well beyond plants, getting to the roots of life, love and family.

City of Girls by Elizabeth Gilbert