On Friday I reviewed two summer thrillers that didn’t come through for me, but I acknowledged I’m finicky these days. Thankfully, I’m back with two more high-octane summer novels that kept me reading until the last page. Hang on.

I have to start my review of Falling with a big caveat: DO NOT read this book if you’re on a plane. Bill Hoffman is a long-time pilot who boards his flight from LA to JFK only to receive a FaceTime call from his wife. More accurately—from a strange man holding a gun to his wife’s head with their young son and infant daughter nearby. They’ve been kidnapped and Bill’s choice is to either save their lives by crashing the plane or save the lives of the 143 passengers by letting his family die. If he hangs up or notifies the police his family dies. Also, in case he thinks he can get around this conundrum, there is someone planted on the plane who is in on the plot.

Your mind is probably racing to all the different ways you’d try and beat this terrorist, but be forewarned, Falling’s author is a flight attendant so she knows planes and the procedures put in place to keep them safe as well as their limitations. Unless you work for the FAA finding cracks in this plot is wasted energy. The only thing that kept this from being 4 stars? An ending that made me laugh it was so extra. Not what you need in a thriller. That aside, strap in and know you’re likely to tear through Falling in the time it takes to fly from LA to NYC. Also, a shout out to all flight attendants. You do a helluva of a job. No one becomes one thinking they’re going to have to physically fight people, but sadly, that’s where we are now. And getting this glimpse into what they are trained for has given me even more respect for them. 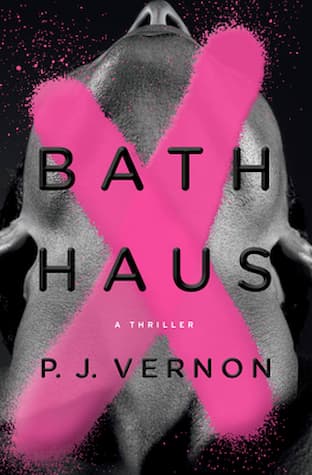 Much like Falling, Bath Haus starts strong and doesn’t let up until the final page. Oliver’s partner, Nathan, is out of town at a surgical conference. Against his better instincts Oliver decides he wants to live dangerously and so, goes to visit a gay bathhouse. But rather than sexy fun, Oliver finds himself running frantically out of Haus after using his locker key to slash the face of the man who was trying to choke him to death. From this point on, Bath Haus is a tightly wound thriller about one man’s life unraveling. Oliver can’t tell anyone the truth, but the marks on his neck are so vicious he can’t hide them. The lies begin. He tells Nathan he was mugged. Then on a dating app, he gets a text from his assailant despite the fact that Oliver never told him his name. Fear spurs him to go to the police and tell the truth. When Nathan returns home, he insists they go to the police so Oliver files a false report—to the same detective.

Bath Haus is one of those occasions when an author perfectly matches their writing style to the plot. From its opening, sentences are chopped, terse, while at the same time conveying a lot of superficial detail—perfectly suited to a novel about an older, affluent male with a handsome, younger partner. Their life is as shiny and well-kept as they are. Until the scrim slips, letting the reader into a reality that’s a bit messier.

Pros and cons to the novel? If you prefer not having graphic sexual encounters in your reading, you might want to pass on this one. Pro? Author Vernon captures the ‘being stalked’ aspect in a way that had me on edge from the beginning. Very paranoia-inducing so maybe only read during the day!

Two more thrillers you might enjoy for vacation reading: Our House by Louise Cavendish and The Woman in the Window by A.J. Finn.

How goes your summer reading so far?

*I received a free copy of this book from Avid Reader Press in exchange for an honest review.*

His Only Wife: A Novel

The Women in Black