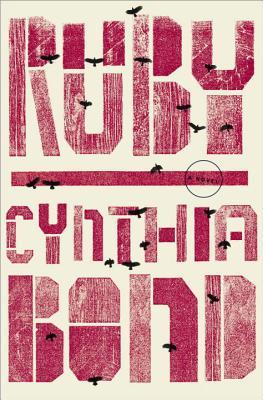 Ephram Jennings has been in love with Ruby Bell since they met as children fishing in a lake near their hometown of Liberty, in east Texas. When Ruby returns to Liberty after escaping as a young woman to the high life in New York City, she has lost all the shine that made her a beauty and seems to have no control over her own body, spending nights howling and screaming, taking no care of herself until she is filthy and having no care for the men who show up in the dark to take advantage of her. But while others mock and take advantage, Ephram waits and hopes for the chance to show his feelings for this troubled woman whom he has loved since she was a girl.

This is a rudimentary synopsis of Cynthia Bond’s debut novel, Ruby, but it is all that is possible for a book that is far too vast to be summarized or labeled. It is dark and hard, with an almost gothic feel of horror at the details of Ruby Bell’s life. A beautiful girl, but born in the wrong place and time as a black in rural Texas, her life and her family’s life is one travesty upon another. Their cause is many but evil spirits are alluded to as often as is the hatred of whites and Ruby herself is particularly susceptible to the spirit world. She has been told by a local healer that

meaning that when she returns from New York she believes herself to be the keeper of the souls of children and babies who have died violent deaths.

Then there is Ephram, a kind and gentle man who at 46 still lives with his sister, Celia, who he calls Mother, because she has been raising him since he was 9-years-old and their mother was sent off to a mental institution. The narrow confines of his life leave him little room to understand her pain but instead of denying what Ruby sees and feels, he refuses to let it take hold of her. Instead, he relies on his own quiet heart to heal her only to find that in doing so, she brings him to life.

But then the fear left him and he realized that the whole wide world had been talking to him for years, only he’d stuffed cotton into his ears, packed it tight until a rail thin storm of a woman had knocked it out with a kick to his head.

Ruby is a novel whose layers have layers have layers. For each moment of understanding the deeper meaning of the story there is another when assumptions and assertions are thrown by the wayside. Is this a novel about race? Or gender? Or just a ghost story? Is Ruby possessed or is Bond personifying Ruby’s emotional dissolution in the face of a life almost unremittent in tragedy? The ghosts, the spirits—do they exist or are they manifestations of the evil and sorrow Ruby has lived? By writing with a force that leaps off the page Bond erases the line between writer and writing. She inhabits Ruby so completely it feels as if she is simply recounting events—which is anything but simple with a story so deep and difficult.

Ruby reads enough like the supernatural to scare and cause shivers but as the truth unfolds it is worse and so much more common. It the evil of men and of religion perverted. Bond weaves together many themes—race, gender, money—making the novel rise up like the forest where much of the evil originates. This is not for the faint of heart or literal minded but for those who want to be dunked in and wrung out by a story, who can suspend belief in the name of prose that bewitches, then Ruby is a novel that will shake you from start to finish.

The Falconer: A Novel by Dana Czapnik

How Should a Person Be?
The Sympathizer: A Novel