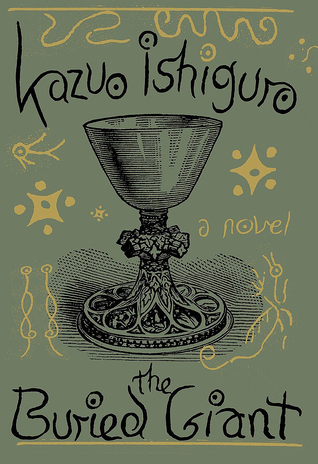 The Buried Giant by Kazuo Ishiguro begins as a tiny tale set in a drab village that amounts to little more than huts huddled around a rabbit’s warren of cave dwellings but grows into an epic tale set in the ashes of King Arthur’s reign. The land is quiet now after the decades of battle between the Saxons and the Britons but, while the peace is a welcome one, it comes at a cost. Axl and Beatrice are an elderly couple living at the edge of this village and somewhere in their memories is a son but they don’t know where he is now. This is the price paid–a pall that lies over the country in the form of a fog, caused by the breath of a fearsome dragon named Querig. Her breath was endowed with the power of forgetting by Merlin as the only way to stop the two clans from fighting to their death and the ruination of the country. With all memory gone, only the moment and what is present can be dealt with but as Querig’s breath fades bits and pieces emerge. So, Axl and Beatrice leave their hut and begin the search for their son. Along the way, their party expands to include a Saxon warrior, a young Saxon boy infected by a dragon’s bite, and the last of Arthur’s famed knights, Sir Gawain.

The weight and elegance of Ishiguro’s prose means that each of his novels, whether they be science fiction (Never Let Me Go) or historical fiction (The Remains of the Day), reads with a stately calm that belies the emotion underneath. There are ogres, pixies, wraiths, and dragons in The Buried Giant but these fantastical creatures pale in comparison to Axl and Beatrice, with their tender, courtly language and the gentle bickering of people who have spent more of their lives together than apart.

Thinking about this now, it seemed to Axl the look on his wife’s face then had been, more than anything else, one of overwhelming relief. It was not that Beatrice had believed all would be well once he had arrived; but his presence had made all the difference to her.

Their love is such that even as they learn that killing Querig will lift the fog of forgetting from their minds, they hesitate, afraid that maybe each had caused the other some slight or hurt in the past and remembrance will pull them apart. Ishiguro plays this gossamer thread between them so perfectly that we too are uncertain. In this way, the fairytale of The Buried Giant echoes the very real dilemma of what we think we want and what we really need and makes for an exquisite reading experience of love and loss.

Six Best Books of 2020
As Close to Us as Breathing