The Headmaster’s wife was one of my favorite book of 2014. Its paperback release is tomorrow so I wanted to remind anyone who might have missed this book what a gorgeous piece of prose it is. Plus, I have 2 copies to giveaway so you could win one to read! 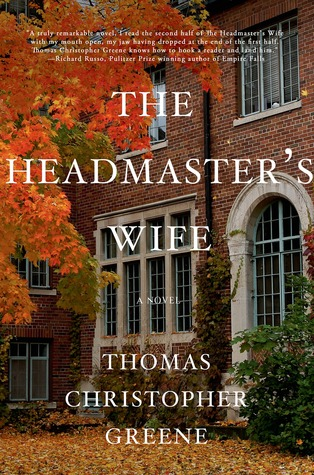 Some books are written with the intent to stun a reader with surprise and don’t offer much beyond that. Others, like The Headmaster’s Wife by Thomas Christopher Greene, use the surprise (the double surprise, even) as a jumping off point to much deeper issues. It is also a life lesson, one that I failed, because I jumped without thought into the novel’s initial trope of a middle-aged man lusting after an eighteen-year-old girl to justify his life, and was all for pitching the book at the end of the first part. My righteous anger and disgust were fully fanned by Arthur Winthrop’s intimate recollections of his time spent with a student, Betsy, and how his ardor led him to risk the rest of his life for her undivided attention.

And now here I find myself, on a cool fall night under the stars on the old campus that has been my home for fifty-three of my fifty-seven years, peering through the window at an eighteen-year-old girl.

There are clues that Arthur is an unreliable witness to his own life. The novel begins in a police station where he is taken after trying to walk through Central Park naked in the middle of winter. It is the police who ask him to explain how and why he has ended up there. A respected headmaster of a small private school in New England with a loving wife, and a son off fighting in Iraq, is now in custody and will, in short order tell the police that he killed the young woman so she would not leave him. So ends part one.

Part two of The Headmaster’s Wife is the story of Elizabeth, Arthur’s wife. She recounts her early years at the school and how they met. Her version of events mirrors Arthur’s but in the way of mirrors everything is reversed. It is here that readers who judge too quickly (i.e. me) will have questions. Things don’t add up. Who is telling the truth? Like any kind reviewer it is time for me to stop talking, as the story is now one to read on your own.

She turns them over and over in her mind, things she has not thought about in years, and she can see now how obvious it all is. Every small event begets another one, each one built off the other until you have a chain of events that all lead to this heartbreaking room with the day slowly fading outside the windows.

What is left to know (without giving anything away) is that Greene uses memory in a way so quiet and subtle it feels like walking on quicksand. The truth is somewhere but who has it? Mystery and suspense can be abused in the wrong hands but Greene plays with the psychology behind the story so deftly there is no feeling of suspending belief or being toyed with, instead, there is love, tenderness, and the sad truth of what the mind does to ensure survival. The Headmaster’s Wife is a painfully beautiful look at where our decisions and expectations take us. And, more importantly… where they leave us.

I have two paperback copies of The Headmaster’s Wife to giveaway- with NO requirements to enter. Just leave your email address in the form so I can contact you and that’s it!

The Royal We
The Mime Order