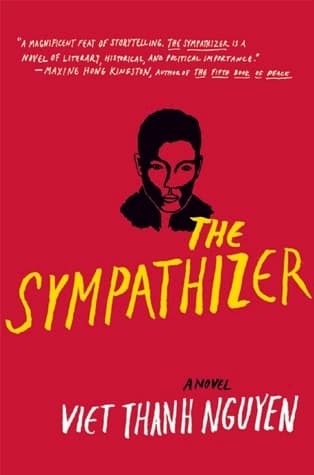 So it was that we soaped ourselves in sadness and we rinsed ourselves with hope, and for all that we believed almost every rumor we heard, almost all of us refused to believe that our nation was dead.

It is only fitting that the narrator in The Sympathizer, Viet Thanh Nguyen’s debut novel, is never named. He is a Communist spy, a man who has spent his entire life turned inside out by hiding his beliefs behind the persona of lackey to the enemy. It is 1975 and as the closest aide to a high-ranking South Vietnamese general he is privy to all of the workings of the Vietnamese and American forces. Unfortunately, it is April and in Saigon the Viet Cong have advanced upon the city and the Americans are pulling out. Instead of being able to stay behind as a member of the new Communist regime his time spent in America as a college student means his commander wants him to evacuate with the General and his family to continue tracking any potential military plots. He does and the times that follow test his beliefs and ultimately, his sanity.

With the return to the United States The Sympathizer showcases the tightening of the web around the narrator. As the child of a French priest and a Vietnamese mother his ethnicity is now exotic rather than reviled while his understanding of all things American makes him an ambassador for a version of Vietnamese culture he has helped to overthrow. And even as he is secretly the enemy of the people around him there are those in that same group who are friends and for whom he feels deep emotions, emotions that compromise his position and place ever-greater pressure on his psyche. In this way, the narrator is a character as multi-layered and complex as Vietnam itself; a man who has been wearing masks for so long he no longer knows who he really is.

No surprise, then, that sometimes I dreamed of trying to pull a mask off my face, only to realize that the mask was my face.

Early on it is made clear that the narrator is writing this story as a confession and he does so with a voice that is dispassionate yet poignant and with a wry understanding of his own life. It makes the novel a complex and thought-provoking look at not only the larger themes of espionage, oppression, and war, but also the more intimate themes of loyalty, patriotism, and friendship. The duality of these themes is seen in the narrator’s split persona in that there is a counterpoint to his every thought and feeling. Nguyen so perfectly encapsulates his precarious situation that throughout The Sympathizer there is the feeling of being on the deck of a ship in a storm—there is no way to keep one’s balance. For the narrator resolution comes only as the novel nears its conclusion and he faces either throwing overboard the paradoxes he has built around himself or letting them drown him.

Free Range Reading: Divergent and The Storied Life of A.J. Fikry
Coming to My Senses: A Story of Perfume, Pleasure, and an Unlikely Bride