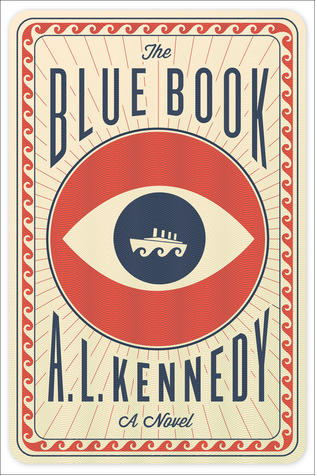 A cruise from Southampton to NYC in January. The location sets the tone for The Blue Book. Crashing, icy seas and gusting winds mesh well with the juxtaposition of a woman on board with her boyfriend who discovers her old partner in crime (literally) is on board as well. A setting that should be one of enjoyment, relaxation and companionship is instead filled with angst, separation and misunderstanding. Is this man following her or has she followed him?

Ostensibly, Elizabeth Barber is taking this trip with her boyfriend, Derek, and with the knowledge that he is likely to propose at some point on the journey. As they wait to board the vessel, another man inserts himself into their conversation asking Beth to do a magic trick involving numbers with him. She complies but is only marginally polite and is relieved when he moves away. Later we learn that this is Arthur Lockwood, Beth’s partner in a successful venture where they acted as mediums, channeling the spirits of the dead, for members of paying audiences.

Now, with her boyfriend felled by seasickness Beth wanders the ship alone, reliving her past and fighting with her future in long monologues where she argues with herself in her head. At the same time we are given more insight into the mysterious Arthur and how he came to a life of such deceit. The platform venue with a larger audience served him well enough but he eventually realizes his forte is working one-on-one, especially with lonely women who have suffered a loss.

He is in the habit of asking to use her bathroom and then trotting about through her flat: gliding into bedrooms, armoires, closets, medicine cabinets. He has gradually fumbled and investigated every tender place within her privacy. He has made it his business—because it is his business—to gather information.

As the book progresses, Beth and Arthur meet again but their dialogue remains as mysterious and complex as their relationship. It is composed of the verbal tics and linguistic tricks used in their trade to dupe the unsuspecting into believing what they want them to believe but it also consists of the secret language of couples. They have come back together and parted more than once but because their language is so encrypted there is much going on that cannot be understood. For Beth

It’s just that I know how to learn things and I learned a man, but I can’t have him, because in person he’s a toxin. I keep him in my skin and I don’t forget, but I can’t be with him. Even when we’re together, we’re not real; I’m not me, he isn’t him.

At the same time author A.L. Kennedy plays with the concept of criminal and victim by positing that these are victimless crimes; people are getting what they want in believing their loved ones have come back to communicate. Whether the morals should be parsed that finely, these characters are deeply troubled and struggling to find their equilibrium. Arthur rationalizes

There might, of course, be innumerable times when he doesn’t even mention charges as he carries out his work. He might simply make it excellent, effective and an act of love and cherish the days when his spine feels upright, evolved, and he is clean and takes pride in the services he embodies: his restoration of lives through—admittedly—grotesque and intrusive lies, but if the lies are beneficial, where’s the fault?

Despite a disconcerting overuse of expletives (most especially, the detested ‘c’-word) Kennedy has constructed a work of trapdoors and illusions that turns the reader into the easiest of marks. By carefully combining the clipped, jangly inner dialogues of both Beth and Arthur with the slower, broader glimpses of their past she acts as a highly accomplished magician and focuses our gaze solely on a reunion, a mending of a broken past and is then able, in the final pages, to astound us with a reality we had not even considered. This is not some slick trick or sideshow chicanery, it is so much more than that and turns a contemporary tale into something profound that causes contemplation and raises questions of karma and poetic justice. Does anyone ever really get away with anything?

Purchase The Blue Book at:

We Wish You Luck