On Tuesday Station Eleven came out in paperback. I reviewed it last fall when it debuted and it made my list of Favorite Books of 2014. Whether you’re spending the summer at home, on a beach or by a pool this is perfect summer reading. 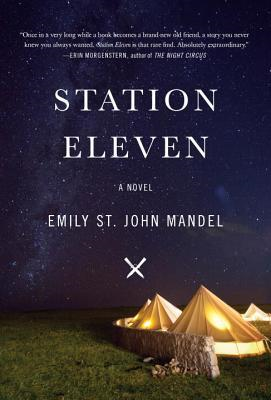 I read a fair amount of dystopian fiction this summer- either set in the U.S. or global and I would have saved myself a lot of time if Station Eleven by Emily St. John Mandel had come out first because it is the best. Big words, I know but, while not garnering the level of publicity of other recent books in the genre, it is a novel that should be noticed for its portrait of an America-to-come that is as recognizable as it is depressing.

There was the flu that exploded like a neutron bomb over the surface of the earth and the shock of the collapse that followed, the first unspeakable years when everyone was traveling, before everyone caught on there was no place they could walk where life continued as it had before…

The big picture is frightening (no Internet, no air travel or cars, even no electricity) but where Mandel excels is in the little things that might not occur to anyone thinking about the apocalypse: no insulin or chemotherapy or anesthesia or, even homier—beds, walls, kitchen appliances—all the things that provide comfort and ease to our lives, gone as the years pass. There is no manufacturing to replace what breaks, no medicine to heal what ails, and no schools to train and educate and it is almost impossible for our coddled minds to imagine. Suddenly, we are pre-Industrial Revolution and completely isolated in our loss and knowledge of what is happening in the rest of the world. A loss all the more painful for those who lived before the end and remember what life was like.

Station Eleven is about life after the apocalypse and yet, it is the life of one man which holds it all together—an actor named Arthur Leander and his connection to every character in the novel. Despite dying of a heart attack while performing King Lear in the novel’s opening pages his impact is still felt decades later as the novel closes. Like a play, the apocalypse is the massive backdrop against which the scenes unfold. It is an immutable structure, but the novel is fluid as it moves among the lives of the people who Arthur touched, possibly without even knowing he did so. Kristen was a little girl when he worked with her in King Lear, and he spoiled her in lieu of Tyler, the son he misses. He gives both children a copy of the science fiction comic book his first wife wrote, Doctor Eleven, Vol. I: Station Eleven. Little does he know how it will impact each and the lives they are about to lead.

Station Eleven is powerful because of its realism. There is no need for zombies, aliens or war lords; even class warfare is dead thanks to the fact that the playing field has been leveled. Instead, Mandel covers the smallness of what is left and the struggle to survive by a diverse cast peopled with those who knew Arthur in some way: his best friend, Clark; his first wife Miranda; Jeevan, the EMT who treated him as he lay dying, to name a few. This is the kind of book that could get bogged down in the back story of so many characters but Mandel’s sense of pace and her taut prose not only render the characters fully alive but endow the reader with a sense of caring about what happens to them. Station Eleven hits all the narrative and descriptive marks found in the kind of brilliant storytelling that goes beyond the plot to hold the reader even after the last page.

*I received a free copy of this book from Atria publishers in exchange for an honest review.*

The Miniaturist by Jessie Burton
Empress of the Night: Review and a GIVEAWAY

The Shore: A Novel by Sara Taylor

A God in Ruins