Back to Moscow by Guillermo Erades
Publication date: May 3rd 2016 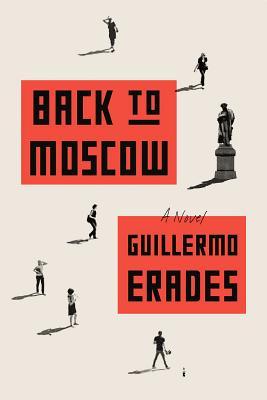 Having recently read and adored The Tsar of Love and Techno I wasn’t sure I needed another book about contemporary Russian life. Happily, I ignored myself and read Back to Moscow anyway. Guillermo Erades’ novel looks at the modern day Russian experience from the microcosm of a young man in Moscow. Martin is twenty-four and has arrived from Europe as a graduate student of Russian Literature at Moscow State University. After making two new friends, school becomes an afterthought to nights spent in clubs where being an expat and speaking English means automatic entry and access to dyevs (beautiful girls).

And nothing compared to the feeling of gliding through face control, those first few seconds after the bouncer has casually beckoned you in, and you step firmly onto the carpet…chosen because you are handsome, special, and you walk towards the boom-boom beats with your heart full of anticipation and excitement—feeling that you belong in Moscow and Moscow is the centre of the universe.

Martin’s thesis languishes as he uses his nightlife as an excuse to explore the essence of the “Mysterious Russian Soul”. Specifically, the female soul as embodied by characters such as Anna in Tolstoy’s Anna Karenina and Tatyana in Pushkin’s Eugene Onegin; the tragic heroine for whom love equals suffering. In this way, Erades cloaks Back to Moscow in the very themes of Russian literature Martin is supposed to be studying—Chekhov’s mood over story, Tolstoy’s suffering over happiness. Mood is achieved in the bored tones of boys trying to be men in an atmosphere of clubbing, copious quantities of vodka, and beautiful women. They posture while discussing and dissecting the issues of life, but they’re empty inside.

A degree in Russian literature is not a prerequisite for reading Back to Moscow, but Erades use of the very themes Martin is exploring make the novel better than just another young man’s coming-of-age story that involves hot women and booze. In the same way, their growing pains and confusion are those of the entire country. The Moscow they inhabit is the one when Putin has come to power. Communism is gone but its remnants still remain with hedonism flourishing next to poverty. It’s the contradictory era of the oligarch in a totalitarian regime.

What I mean is how Russia tries to overcome its inferiority complex. The hostile attitude, the political whining, it’s just a façade, it makes Russians feel more valued, or at least, less ignored. That’s why they came up with the whole Communist fiasco and put up with it for so long. They knew it didn’t work, but they liked the feeling of being feared.

Each of the characters puts forth these varied sentiments about the country. It isn’t until the final events of Back to Moscow that both Martin and Moscow are dragged from the clubs and shoved into adulthood. It’s only fitting that Erades closes the circle of Martin’s education by evoking Tolstoy’s Russia: life is about meaning not happiness.

The House of Hidden Mothers

The Wife, The Maid, and the Mistress

Happy Any Day Now
You Will Know Me