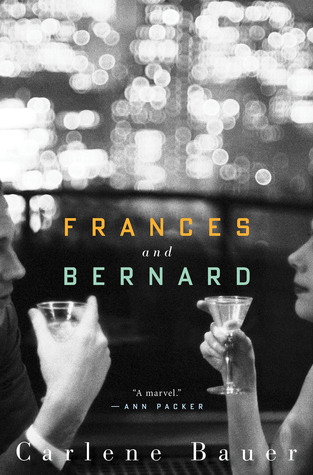 In today’s world of email, texting, and skype there is an instant gratification element to communicating that blunts its finer points, especially in relationships. It is with great delight, then, to read Frances and Bernard, Carlene Bauer’s fictional look at the friendship between two writers, using the relationship between Flannery O’Connor and Robert Lowell as its basis. The novel is written solely in letter format by a young author names Frances Reardon and a poet named Bernard Eliot.

The pair seems an unlikely duo as Bernard is a fiery flirt who revels in the romanticism of Catholicism while Frances is a plain speaking serious woman. They meet at a writer’s retreat in the late 1950s and begin a friendly correspondence shortly thereafter. Bernard is intrigued by Frances’ devout Catholicism and uses her as a sounding board for his own religious experience. The letters begin with all the ferocity of two dissimilar yet receptive minds recognizing a compatriot in the other. Ideas and thoughts on life and life as a writer fly between the two as their bond grows. Frances’ straightforward nature is exactly what Bernard needs and each provides honest but supportive feedback of the other’s work. This mutual admiration is enhanced by infrequent visits, when they pursue and deepen their friendship. It is during one of these visits, after three years of epistolary friendship that Bernard changes the rules by kissing Frances, a move that does not go over well.

As a ladies man, Bernard is confounded by Frances’ apparent lack of interest in love and marriage. For her part, her stoicism often obscures her reasons for leading such an austere emotional life. There is the feeling in her words that it may not be a choice but a defense mechanism. Even as their relationship deepens and, almost inevitably, turns to romantic love, Frances cannot bring herself to let go to the experience, instead remaining in tight control of her feelings and Bernard’s actions. There is intimacy in private but it is kept isolated on her part while Bernard’s passion overflows with each sentence. It is only in her letters to her closest friend her thoughts are more transparent and touching

I will try and put the two feelings into words. First, when I am walking down the street to meet him and I know that I have come into his view, and his eyes, as I approach, are giving off sparks of both hunger and affection…I feel that I would do anything to have that look cast upon me for the rest of my days.

Frances and Bernard is rewarding reading on many levels. There is the prose itself, deeply intelligent, thoughtful, and entrancing. The passages where each writes of their process or life as a writer are evocative, even to those who have never attempted the art. For Bernard, early on,

… I still wonder—I want to think deeply and not have it carry me off some place where I am useless. I mean, I carry myself off enough when I write, and I fear that, although it may make me great, it may make me useless as well.

What is strange is that I am not bothered by the fact that my brain feels like a Dust Bowl farmhouse left vacant after the Depression. But do you know there’s a pleasantness to it? I am imagining my mind as the upper room before the disciples piled in, readying itself for the Holy Ghost.

The relationship moves at a pace that is gentle and stately, until it is not. The reader is lulled in, able to relax and breathe deeply as they read each line from these profound, complex, flawed, exuberant characters. At moments both large and small the disparate voices of the two writers are captured in a way so seamless it feels as if this is non-fiction.  Bernard’s letter to Frances while he is hospitalized for a manic episode brings forth some of the most poignant and heartbreaking sentences of the book.

The people here are all crushed cigarette stubs of people. Bent, white, ashen, diminished. Myself included.

There is no layer between Bauer and her characters. Over eleven years we experience the greatness and minutiae, humor and anger, joy and sadness between two friends with a deep emotional bond, and feel lucky for the gift. Frances and Bernard is fiction but reads as life and makes one long for the day when communication between friends wasn’t tapped out on a keyboard or limited to 140 characters but, just like this novel, could be savored again and again from a letter.

So Much Life Left Over

Love and Ruin by Paula McLain

An American Marriage: A Novel

Maybe You Should Talk to Someone