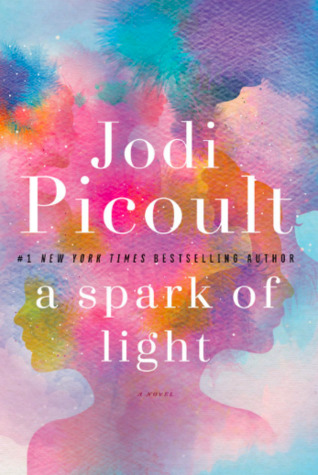 Jodi Picoult is a seasoned pro at presenting both sides to highly charged and complicated issues—which is one of the reasons I love her books. She moves me out of my comfort zone and gives me perspectives that I might not come to on my own. Generally, she finds hot-button topics shortly after they’ve hit the mainstream news, but in her latest, A Spark of Light, she is prescient with her subject. The novel is about a hostage situation in an abortion clinic. Given that Brett Kavanaugh, (despite numerous irregularities in his testimony and a credible sexual assault incident being brought against him), is on his way to being the Supreme Court Justice who overturns Roe v. Wade, means Picoult feels psychic. If you have an active uterus, this is frightening news. The novel is no less unsettling.

A Spark of Light is incredibly even-handed in its approach. Picoult begins the novel at the end of a hostage stand-off situation at a women’s clinic in Mississippi. It’s the last place in the entire state where a woman can get an abortion. George Goddard bursts in one morning, kills several people and wounds others, to avenge his 17-year-old daughter, who terminated an unwanted pregnancy. Except she didn’t do it at the clinic. She did it using pills she purchased online. Other hostages include a 15-year-old girl there to get birth control pills, her aunt who drove her to the clinic, and a 63-year-old woman there for a check-up.

A Spark of Light covers a span of eight hours, during which Picoult moves backwards, meaning some of the most shocking events happen in the first pages. She doesn’t stint on the drama—we quickly learn that the 15-year-old girl is the daughter of the hostage negotiator. Another wounded hostage is a pro-life woman infiltrating the clinic, trying to find damning evidence of coercion. Slowly, Picoult fills in the outlines of all their lives. She uses each character to portray another aspect of this vitriolic debate and does so in a way that illuminates larger issues like racism, economic inequality, and sexism. It makes for powerful and engrossing reading, but even though she provides insight and empathy to opposing sides of a controversial topic, I’m not optimistic that A Spark of Light will change anyone’s mind.  For once Picoult may have a chosen a subject that is beyond even her abilities as a master navigator of the human condition.

“But we can’t make policies based on religion when religion means different things to different people. Which leaves science. The science of reproduction is what it is. Conception is conception. You can decide the ethical value that has for you, based on your own relationship with God…but the policies around basic human rights with regard to reproduction shouldn’t be up for interpretation.” Dr. Louie Ward in A Spark of Light

His Only Wife: A Novel

In Love with George Eliot: A Novel