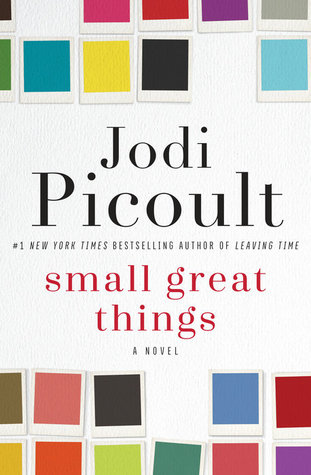 Jodi Picoult is one of those authors I love for being entertaining yet educational. In each of her novels she takes on a subject and not only turns it into gripping fiction, but informs the reader. In her latest, Small Great Things, the subject is racism and as always she approaches it with a unique moral dilemma. Ruth is a labor and delivery nurse with twenty years of experience and accolades from former patients and colleagues alike. She is passionate about her work, just as Turk Bauer and his wife, Brit are passionate about white supremacy so they demand that Ruth not be allowed to touch their newborn son. When she finds the child in distress, she follows the directive until her nursing instincts and human compassion take over and she tries to save his life. He dies and they have her charged with murder.

Small Great Things plays out not only in the courtroom, but in the everyday lives of the characters. For Turk, that is trying to stay strong through his wife’s depression and rage that his ‘organization’ cannot take vengeance for their child’s life while Ruth has to go to work at McDonald’s to support herself and her teenage son, because her nursing license has been suspended. Her lawyer, Kennedy, is confronted not only with the difficult case, but with her very understanding of racism and, ultimately, her part in it. As the trial progresses, Ruth finds that her worst fears are confirmed and that what she believed to be true about her work means less than the color of her skin.

It is remarkable how events and truths can be reshaped, like wax that’s sat too long in the sun. There is no such thing as a fact. There is only how you saw the fact, in a given moment.

This is not easy reading given the times we live in now. Picoult does not hedge with her characters—the Bauers are frightening in their hatred of anyone not just like them, with Brit Bauer being as violent as her husband, if not more so. The vitriol of their ideology and its insidious spread made me queasy. But what makes Picoult the master of her craft is that she presents all sides of even the most unlikable characters and situations. No one is either as good as they seem or, sometimes, as bad. Through them, she forces us to look at ourselves. In Small Great Things, this epiphany comes first to Kennedy, who has believed, as a public defender, she understands racism and its impact. Instead,

When I started working on this case, ladies and gentlemen, I didn’t see myself as a racist. Now I realize I am. Not because I hate people of different races, but because—intentionally or unintentionally—I’ve gotten a boost from the color of my skin.

And there, once again, Picoult turns the snow globe of life upside down and shakes our perceptions with a fury. Small Great Things is the epitome of what my friend Sarah at Sarah’s Book Shelves calls “brain candy”—books that are easy-to-read and smart. You cannot put them down because the story is as addictive as M&Ms, but unlike candy, it’s good for you.

Circling the Sun: A Novel