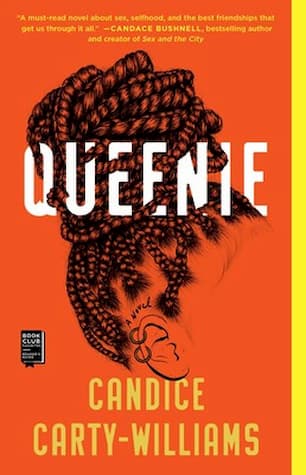 Queenie is a 25-year-old British Jamaican woman who’s got her dream job and a strong circle of friends. She’s also separated from her white boyfriend, living in a tiny dump of an apartment with roommates she avoids, and is on the verge of losing her job because she spends so much time at the office dealing with her personal life. She’s the eponymous star of Candice Carty-Williams debut novel, Queenie.

Queenie has been compared to Bridget Jones but I didn’t get that at all. There was no darkness to Bridget Jones—just a quirky, somewhat silly young woman who made bad emotional choices in men. None of whom had such rough sex with her that a nurse thought she’d been raped. Which happens to Queenie—and she continued to hook up with the guy. Also, Bridget’s family was quintessentially cute, even if her parents’ marriage had its hiccups. Queenie’s background is such that it is never discussed. She is in contact with her grandparents, but wants nothing to do with her mother. There’s nothing silly in Queenie’s life.

But enough about Bridget. Setting aside that comparison, the hip, contemporary feel of much of Queenie’s story clashes against the darker themes of racism and abusive relationships. It was hard to move so quickly from the wry, sharp humor about sexual freedom, figuring out life, and adulting, to knowing that what was really happening was a woman who cared so little for herself that she was allowing herself to be treated horribly by all the men around her.

This is probably a case of my being too old to appreciate the nuances of Queenie. Young women acting out against themselves is painful reading. Layering that with the fun, stupid mistakes of your early twenties left me uncertain what I was supposed to feel. The blatant racism made it even worse. I felt bad for most of the novel even if I really appreciated that by the end, it wasn’t about finding a boyfriend. It was about finding yourself. While I may not have related to parts of the story, I felt everything Carty-Williams’ writing was trying to convey. In that way, Queenie succeeds.

How to Set a Fire and Why

Gatecrasher: How I Helped the Rich Become Famous and Ruin the World
Guapa: A Novel

The Secret Keeper of Jaipur