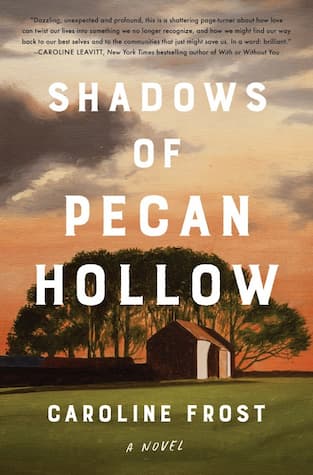 Kit is 13 when she decides to abandon being abandoned. She’s been in foster care since she was a baby, in more homes than she can remember, but none of them has been good. Or even decent. She’s starving in every way and so takes off for a town called Pecan Hollow where an overworked social worker let her know she has family. She has no plan except to run and hide so she doesn’t get caught and sent back. Instead, on the first day, she’s hauled out of a car as she’s trying to steal a bag of fast food from the front seat. But instead of turning her in, the man who catches her changes her life in Shadows of Pecan Hollow.

Manny is the handsomest man Kit has ever seen. His skin is brown like hers, but his eyes are blue. He’s charming and kind and immediately takes her to get real food. Then he asks her if, rather than going to a boring small town, she’d like to have adventures with him. Kit sees no reason why not. She’s almost feral, sleeps with a knife, and knows she can take care of herself. For the next six years their relationship progresses personally from big brother to something far more complex and professionally from shoplifting to robbing gas stations. It’s only when Manny’s behavior escalates into drug induced violence that threatens their lives and livelihoods that Kit takes off, leaving him holding the bag for their crimes.

When Shadows of Pecan Hollow opens Kit lives in Pecan Hollow, works at a veterinarian clinic, and is now firmly encased in her impenetrable outsider shell. She interacts with the people in town on a transactional basis only, knowing what they say about her. She’s rough, rude, fierce, and a loner. She’s not happy this way, but she has no point of reference for change. It’s easier to let people think what they want. And then, Manny turns up, ready to start a new chapter in his life after a decade in prison. Once again, the snow globe of Kit’s life is shaken hard.

Even though it takes place in a small town Shadows of Pecan Hollow is a Texas-sized novel. Pulled apart, the characters, their actions, and many of the events seem overly dramatic, but the way author Caroline Frost writes it, it couldn’t happen any other way. Kit is a person so stripped of identity that she’s a blank slate for someone like Manny to write on. He does, creating a character who perfectly fits his needs, but tapping into Kit’s darkest beliefs about herself.  Throughout the novel, despite being difficult, she draws the reader on. The need to know what’s going to happen is conveyed in Frost’s sharp, dry prose. Shadows of Pecan Hollow feels like a story pulled out of an author, a bit uncontrolled, but in a way that makes me want to know what Frost will write next.

*I received a free copy of this book from William Morrow Books in exchange for an honest review.*

Everyone Knows How Much I Love You

The Golden Couple: A Novel

The High-Rise Diver: A Novel

The Leftovers by Tom Perrotta

The Mountains Sing: A Novel