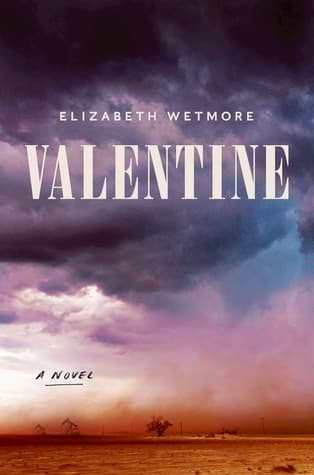 When you encounter a scene like the one that opens Elizabeth Wetmore’s novel, Valentine, and the words

…she imagines him facedown in the dust, lips and cheeks scoured by sand, his thirst relieved by only the blood in his mouth.

sear themselves on your brain you know you are in for high-intensity reading and immersion in a heartbreaking world. A world where a 14-year-old girl can be brutally raped and beaten—to the point her spleen has to be removed—and she’s not a victim. Because she’s Mexican and it’s 1976 in Odessa, Texas. After the night of her torture, as her assailant lies passed out in his pickup truck, Glory manages to walk to a farmhouse where a heavily pregnant woman takes her in. Mary Rose is 26 and alone in the house with her little girl. This is the starting point for a novel that spreads through the girls and women of Odessa, exposing their lives, giving them voices.

This scene and every one after, even those of everyday life in a Texas oil town, are scoured of anything not vital to survival. Despite the immediacy of their initial meeting neither Glory nor Mary Rose see each other again. Mary Rose is haunted by the belief that she didn’t do enough for the girl; a belief she fights by agreeing to testify for the prosecution, despite the fact that it sets her against everyone she knows. No longer able to stay alone on their ranch while her husband works she moves into town across the street from Corrinne—a former teacher, who lost her husband six weeks ago and has found her grief overwhelms even the smallest of actions. Neighbors visit and leave casseroles, but Corrine won’t answer the door. Even to Debra Ann, a 10-year-old girl whose mother has run off and who is left to herself every day while her father works. Her mother is Ginny, Mary Rose’s friend from high school, where they were both kicked out before graduation for being pregnant. Ginny was 15, Mary Rose, 17.

These are the women, and the girls, who populate the pages of Valentine so thoroughly they’ll embed in your psyche. Living amidst the minefield of a way of life that breeds desperation and violence. A place run by men whose energies go towards extracting wealth from the ground or working as cheap labor for those who do. For many of these men the lines have already been crossed and a woman is just another commodity to be taken and used up.  She has a place pre-ordained for her

Shit, I got my first cheerleading outfit when I was still in diapers. All of us did. If we were lucky, we made it to twelve before some man or boy, or well-intentioned woman who just thought we ought to know the score, let us know why we were put on this earth. To cheer them on. To smile and bring a little sunshine into the room. To prop them up and know them, and be nice to everybody we meet.

But throughout this harshness, Wetmore seeds Valentine with tiny bits of beauty that bloom on the page. Against the brutality of men, the lives of these indomitable women tangle fragile stalks against each other, finding ways to flower in a landscape that is bleached out, wrung of every bit of vitality. They prevail, making Valentine unforgettable literary fiction.

The House in the Cerulean Sea

The Troop: A Novel
Tuesday Nights in 1980