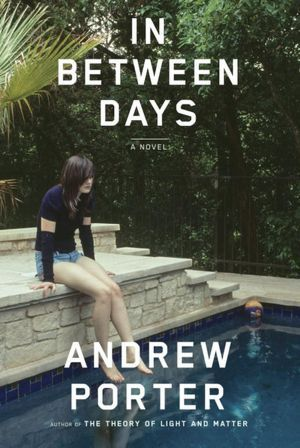 He looks out the window to his left and notices a small row of brown stucco houses, all old and somewhat disheveled, and realizes then, with something like panic, with something like fear, that he doesn’t actually know where he is, that he must have made a wrong turn somewhere, that somehow, in this city where he’s grown up, this city where he’s lived all his life, he is lost.

Coming in the opening pages, this paragraph gives the reader their first clue that Elson Harding is a man adrift, a man with problems. He’s recently divorced from his wife of 30 years but has already begun another relationship with a younger woman. His work as an architect was once desired but is falling out of favor. For his ex-wife, Cadence, the problems seem more clearly defined: she married too early and gave her life to her husband. While being a wife and mother had seemed the right thing to do in her early twenties it ultimately left her with …

an emptiness filling her up, as if she’d somehow been left behind, cheated out of a life she hadn’t thought she’d wanted until she’d realized it was lost.

And if the next generation is their parents’ hope then there is cause for concern in the Harding family. Their son, Richard, has graduated from college but works in a coffee shop and still lives at home. He has a talent for poetry but cannot commit because

once he’d defined himself as a poet, once he made that commitment, he’d never again be able to pretend he didn’t care. He’d have to acknowledge, on some level, that this is who he was.

Their daughter Chloe has just been suspended from college for reasons not yet made clear to anyone in the family. After she returns home and her situation is revealed to be more than a little misunderstanding, each character’s reaction says as much about their situation as it does about hers. At the same time, her situation becomes the impetus for each one, the catalyst necessary for action. For Richard, this is true because

She was, for him, the one sole connective tissue in what was otherwise a difficult and absurd world, a world that seemed to blur around the edges, a world that rarely made sense, a world that was impossible to negotiate without her.

In Between Days is reminiscent of other recent works dealing with the American family, such as Freedom, Strangers at the Feast, and This Beautiful Life. All capture the splintering of the family unit and worse, the misplaced belief of parents in the solidity of their relationships with their children.  Author Andrew Porter probes these links but towards the end there is the feeling that the drama is being piled on, unnecessarily, to make a point that has already been made. It is not enough to detract from the book but it does dilute the deeper personal issues, of which there are plenty, especially regarding Chloe and her choices. She is a study in one bad decision following another, but Porter does use this effectively to build the book’s suspense almost to the breaking point.

Ultimately, there is resolution to all of the drama but only in the case of the children does it involve change and moving forward, leaving this reader to wonder about Porter’s almost nihilistic vision of the role of parents in the development of their off-spring. They come off as extraneous, if not a hindrance. In Chloe’s case, the pursuit of an identity is so extreme and thoughtless, it’s painful to read. For the adults, is there a point in life at which true change is impossible, leaving Richard and Cadence to repeat their mistakes endlessly? In Between Days looks at this modern family and through their eyes explores the world of today and where it, and we, fall short.

The Paper Wasp by Lauren Acampora

It’s Not You, It’s Me: Mini-Reviews
Chronicle of a Last Summer