The Women in the Castle by Jessica Shattuck
Published by William Morrow
Publication date: March 28th 2017

At a German estate in 1938 a summer party turns serious when a group of men discuss their determination to stop Hitler from his ascent to power.  Marianne von Lingenfels is the wife of the group’s leader and she makes a promise to take care of the wives and children of the men in the group if they die in their efforts to stop Hitler. They do fail in their assassination attempt and are executed. In The Women in the Castle, after the war has ended with Germany’s brutal defeat, Marianne tries to make good on this commitment, even though the bucolic life they once knew is now in ashes. Despite knowing only one of the women, she finds her and another one and brings both and their children back to her husband’s castle to try and repair their lives and move forward.

Marianne’s herculean efforts lead her to Benita, the wife of a childhood friend; their little boy and another woman, Ania and her two sons. Suddenly, three women who don’t know each other or how they’ve spent the war are sharing a ruined castle with five children. If their current lives are harrowing—a constant parade of refugees and POWs trying to get home, little to no livestock, crops or money and no protection from enemies—it is nothing compared to their lives during the war. Benita’s son is taken from her and she is forced into sexual slavery by the Russians. Ania’s story has twisted long before the war’s end because her past is not as it appears nor is it past.

Interestingly, the nuance Shattuck gives her women is both the novel’s greatest strength and its weakness.  The Women in the Castle is not a straightforward story of heroines or villains, but something more complicated and therefore, intriguing. Benita and Ania elicit a variety of emotions from their lives, but although Marianne is at the literal and moral center of the novel, she is the most one-note character. Her determination for justice and her belief in the ideals of the resistance are laudable, but she’s had the most sheltered existence of any of them and as the novel progresses she allows judgment to override compassion and friendship. Benita later realizes this

Marianne, who had once seemed so intimidatingly wise, was in fact ignorant. She was her own kind of dreamer, a blind mathematician skating along the thin surface of life, believing in the saving power of logic, reason and information, overlooking the whole murky expanse of feeling and animal instinct that was the real driver of human, behavior, the real author of history.

The lack of dimension in Marianne puts me off The Women in the Castle, but not to the point of dismissing it completely. It holds the novel back, but beyond that Shattuck finds a fresh perspective on this most-written-about war.

p.s. The Women in the Castle is one more of the pieces of historical fiction I’ve read this year that has felt frighteningly similar to American politics now. If I didn’t know Shattuck had been writing the novel for ten years, I’d say it was a thinly veiled comparison between Hitler’s insidious takeover of Germany and its disastrous consequences with Trump and his advisors and their plans for America. Just sayin’. 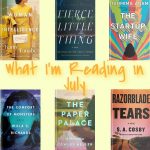 Sunburn: A Novel by Laura Lippman

The Light in the Ruins
The Madwoman Upstairs