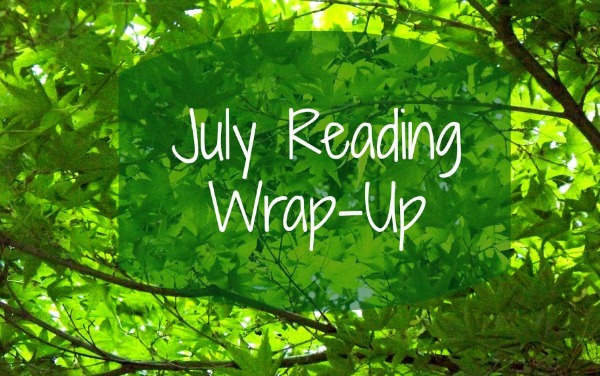 Goodbye, July! My first full month of real summer in the Midwest. What I loved: fireflies, thunder and rain storms that last for hours. What is not so much: humidity that flattens me but makes my hair explode. And flies. So many flies! Why?

The natural world aside, even with the increasing crazy that is America, July was an outstanding reading month. I finished 15 books and had not one, but TWO 5-star books and they were BOTH nonfiction. That’s all-caps news! Here are some of the highs and the lows of the month.

Ransom by David Malouf is the spare telling of Achilles’ killing of Hector and his continued desecration of Hector’s body in an effort to assuage his rage against the death of his beloved Patroclus. The novel moves between Achilles and Priam, Hector’s father, who comes to believe that chance may play a role in the lives of mortals. That they may be more than just playthings for the gods.

“It seems to me,’ he says almost dreamily, “that there might be another way of naming what we call fortune and attribute to the will, or the whim, of the gods. Which offers a kind of opening. The opportunity to act for ourselves. To try something that might force events into a different course.”

While the tale is a dark one Malouf’s writing reminds me of Kent Haruf—an economical use of words to their greatest advantage. Priam’s ruminations on men, war, and the life of a king are imbued with a sorrowful beauty.

Becoming Duchess Goldblatt by Anonymous: My first 5-star nonfiction of the month. My review

I am all for a dystopian, pandemic novel with a twist, but unfortunately, Afterland didn’t deliver and I abandoned it at halfway through. The virus only affects males, killing off all but a very small proportion of the population that is immune. Cole’s pre-teen son is one of these, but he’s now a science experiment for the government. Plus, three years after the pandemic the black market for sperm donors is thriving. So, Cole is on the run with him.

Given that it takes authors years to write their novels the details in Afterland are so prescient they made me queasy, from the already real—no hand sanitizer left in stores—to abandoned homes and massive secret government forces. I could have powered through that, but the plot meandered. There were villains and the hunted, but where any of them were going and why was not clear enough to keep me reading.

The Heir Affair by Heather Cocks: Fun, fast fiction about the royals. My review.

I love Aimee Bender’s ability to blend magical realism into reality in a way that makes it feel not only possible, but likely. Her latest novel, The Butterfly Lampshade, has a trace of this element, but is largely an introspective psychological journey.

When Francie was 8-years-old her mother had a psychotic episode and smashed her own hand with a hammer. Francie was quickly removed to the loving care of her aunt and uncle, but it meant moving to another state and leaving her mother in a care facility. They never live together again.

Now in her late 20s Francie is trying to reconstruct the unusual events that occurred in her own life after her mother’s breakdown. It’s intriguing, but the magical element hinders rather than helps the novel. What is one family’s journey in dealing with extreme mental illness loses its impact with the magical phenomena Francie remembers. I liked it, but did not love it the way I hoped I would.

The Woman Before Wallis by Bryn Turnbull: My review

Blowout by Rachel Maddow: A deep dive into the history of America’s energy production and its ties to Russia and Putin.

From Scratch: A Memoir of Love, Loss, Food and Finding Home in the Sicilian Countryside by Tembi Locke
Publication date: May 7, 2019

From Scratch is a poignant memoir about a black American actress, who, while still in college, travels to Italy and falls in love. Not just with the country, but with an older, white, Sicilian chef. They marry, adopt a daughter, but after 17 years together he dies of cancer. I listened to the audio version of this book and Tembi Locke, the author reads it. Her writing evokes so many things—the love of food and its ability to bond, struggling with the illness and death of a loved one, and creating a new life. Her voice is marvelous, she speaks Italian like a native due to the many summers she’s spent staying in Sicily with her mother-in-law in the tiny town where her husband grew up. Lovely reading.

That’s all there is for my month. I’m grateful for the wonderful books and hoping August will be bringing more interesting reading!

How was your month?

*I received a free copies of some of these books from the publishers in exchange for  honest reviews.*

The First Rule of Swimming