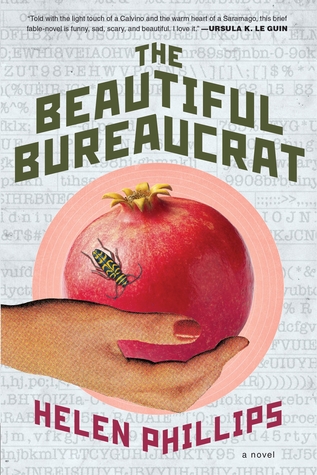 The Beautiful Bureaucrat has been raved about and reviewed by almost every book blogger I know and discussed at The Socratic Salon so I’ll try and keep this brief. No matter what else I think about The Beautiful Bureaucrat, author Helen Phillips has to be commended for writing one of the most immersive novels I’ve ever read. The premise is a bland, grey, dreary world in which a young couple ends their unemployment drought with jobs as data entry clerks. What they do not know is that they work at the same company. Josephine’s office is minuscule, with smudgy walls surrounded by long hallways and closed doors. The building has no windows. Her boss’ face is so monochromatic he appears faceless. Her days pass with virtually no human interaction and in the mind-numbing entry of numbers that appear to be completely random. Through these kinds of details, with each sentence, each word, Phillips coats the reader in the same kind of lethargy Josephine feels. This grinding turpitude gains traction to become a more ominous feeling, especially when her husband disappears for days on end and reappears without explanation.

There is a lot of mystery in The Beautiful Bureaucrat rivaled only by the symbolism, which is plentiful to the point of distraction. Without something real to balance it, everything as a symbol means nothing is real and creates meaning overload. Sometimes, a cigar is just a cigar and sometimes there is nothing behind all that smoke. Beyond symbolism run amok some of that smoke also includes assertions that The Beautiful Bureaucrat is Kafkaesque. Yes, it deals with the absurdist nature of bureaucracy (and even has the word bureaucrat in the title!) but it’s a stretch. There is none of the existential heft of Kafka but reminded me, instead, of O. Henry’s charming but light story, The Gift of the Magi, in which a poor couple, acting out of love, unknowingly work against each other and end up losing their dearest possessions. Basically, a twisty story tied up with a neat bow and somewhat moralistic ending.

What else can I say? Many people have given The Beautiful Bureaucrat 4 or 5 stars but, for me, it was a 2.5—meh. Where the novel succeeds is that all the mystery and symbolism, elements that did not work for me, make the novel a marvelous book club book. It can be parsed and pulled apart in an almost infinite number of directions and is likely to engender animated discussion.

Because I was out-of-sync on The Beautiful Bureaucrat with so many great book bloggers I respect, here are links to their reviews to get their perspective:

The House in the Cerulean Sea
Tuesday Nights in 1980

Equal of the Sun