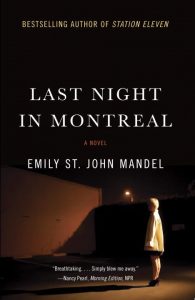 On a cold snowy night a seven-year-old girl leaves her mother’s house when her father beckons her from the yard, beginning an odyssey that continues into her adulthood. Her birth name is Lilia but as she and her father spend the next decade moving from town to town to avoid capture her name changes so frequently it’s hard to remember. Not that it matters, she does not attend school, they live only in motels or the car and they never stay in one place for more than a month. This is only the beginning of the complicated, fractured world of Last Night in Montreal, Emily St. John Mandel’s eerie debut novel.

He’d tell her anything about everything, except Before. He said it really wasn’t that important. He said they had to live in the present. Before was shorthand for the time before he started driving away with her, Before was a front lawn somewhere far to the north. More specifically, Before was her mother.

Last Night in Montreal opens in New York City with a twenty-something Lilia leaving Eli, her boyfriend of several months. She is a charming young woman, hardworking and self-sufficient but reticent about her childhood. The only part of her that could be considered odd is that she cannot live anywhere for more than a few months at a time. She settles briefly before picking up and moving again. Because Mandel is moving back and forth between the past and present we know what the people in Lilia’s life do not: that rather than being the eccentric choice of an adult this is the only life she has known since her father kidnapped her. When she turns sixteen he suggests they stop traveling and goes so far as to settle down in New Mexico but she cannot. With no real memory of her past she can only run forward without stopping.

The heartbroken Eli is just one of the characters that orbit around Lilia. Another is Christopher, a private investigator, who begins working on the case four years after the abduction. Using minimal clues, Christopher takes on the case in part because he has a daughter that age. What is meant to be a job turns into a mission and he spends years traversing America in his car. Years in which he leaves his own daughter behind to follow Lilia and her father even after Lilia turns sixteen. It is with this kind of subtlety that Mandel plumbs the depths and nuances of family life and relationships. As Last Night in Montreal progresses and Lilia’s life passes, the truth is stretched, twisted, and ignored. When a novel starts with something as major as a child abduction it is hard to imagine that psychologically there would be much more territory to traverse but Mandel is brilliant in building the dysfunction amongst her characters right up until the novel’s shocking conclusion.

The First Day of Spring

The Death of Bees

The First Rule of Swimming