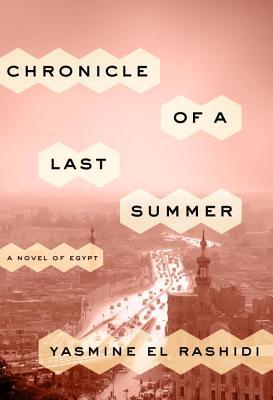 Chronicle of a Last Summer is a small book about a big time in modern Egypt. The novel spans from 1984 to 2014, but only as small chapters in the life of a young woman living with her family in Cairo. In 1984 she is six and her father has recently left, but the reason is never made clear. Even when she is older there never seem to be answers. In this way author Yasmine El Rashidi sets a tone of disconnect that affects each of the remaining characters differently. Her mother withdraws, but a cousin becomes an activist and when the narrator gets older she goes to film school and writes.

The lack of answers that are the norm for a child’s life do not dissipate as the narrator gets older. Instead, she moves through her life with a silent mother who hardly leaves their house and only a male cousin to discuss with her what is happening within their country. As she starts to document life in the abstract he pushes her to become an active voice in the struggle for change. El Rashidi summarizes her mindset

Ours wasn’t a culture used to change. Permanency was valued. We lived in the same places we were born in. We married and moved around the corner. A job was held for decades. The less change, the less movement, the better.

The biggest thing I took away from Chronicle of a Last Summer was how little I knew of Egypt. I thought it was a more modern, progressive country, but in the novel daily power outages, unclean water and even ration books are facts of life.

The sense of ennui doesn’t change even after the Arab Spring when her cousin is arrested. The novel continues to be permeated with an enervating sense of no answers or accountability and meant that Chronicle left me with an oddly deflated feeling. From halfway around the world these felt like tumultuous times of great change, but the novel felt like the opposite—sad and small events with little or no impact.

The Beauty of Your Face
Girl at War: A Novel

Midnight at the Bright Ideas Bookstore