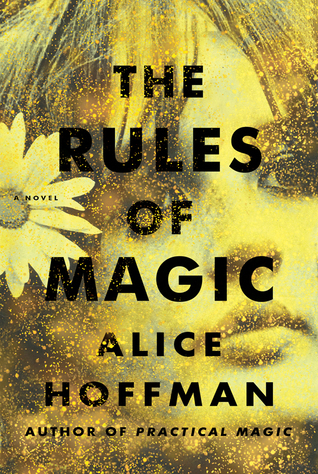 Whatever is meant to be is bound to happen, whether or not you approve.

Frances, Bridget (Jet) and Vincent are born and raised with no sense of family. Their parents, actively discourage any discussion of grandparents or other relatives. Even worse, their mother, Susanna, gives them odd rules for living, including: no walking in moonlight, no red shoes, no cats, no candles, and no books about magic. Life overflows with dreary rules and each grapples with keeping their own unique abilities secret. Until the oldest, 17-year-old Franny, gets an invitation to a small town in Massachusetts to visit an aunt she knows nothing about. Susanna’s adamant ‘no’ turns into a reluctant ‘yes’ when Jet and Vincent offer to go with her to keep her safe. And, just like that, the wonder, thrill, and utter joy that is Alice Hoffman’s The Rules of Magic takes off.

The summer with their Aunt Isabelle turns out to be the greatest of their lives. Suddenly, everything about them that was supposed to stay hidden and unacknowledged is celebrated. Even better, there are NO rules—eat what you want, when you want, go where you want, do what you want. They finally learn the Owens’s family history, beginning with Maria, who built the house in the 1600s; a witch who escaped the Salem trials. The mysteries surrounding her mean that, even with the passing of 300 years, the Owens women are still viewed with distrust in the town. This, despite the fact that women show up on the porch every night to get help for love, pain, colicky babies, hives, and so much more. This is the reason for Franny’s invitation—she is next in line to take over the house and the family responsibilities when Isabelle dies.

The darker side of Maria’s life lies at the center of The Rules of Magic. In an effort to save her daughter and all the daughters that would follow the pain she suffered she curses them: if they fall in love, the man they choose will be destroyed. The Owens women are not meant to love. For the cerebral Franny, this is not too much of a problem, but that very same summer the romantic and gentle Jet falls desperately in love with the wrong boy, testing fate. And what of Vincent? The curse may not apply specifically to him, but his extraordinary charisma and rebellious nature lead him to tempt destiny in his own way. For all the freedom Isabelle granted them, there was a rule, only one: Accept your gifts, don’t hide yourself, but if you use your magic, do no harm. Vincent cannot resist pushing this boundary, especially as making money, lots of it, can come from dark magic.

Having set the stage for Franny, Jet, and Vincent, Hoffman lets their lives play out for the next three decades, but while magic is ever present, it is the least important part of the lives she gives them. Their magic doesn’t save them from the hurts and pain of the world or the consequences of their actions. Even with extra gifts from the universe, it is the heart and humanity of these three characters that is the most powerful thing about them. If there is witchiness to be found, it is in Hoffman who casts a spell that binds the reader to the pages and holds them fast. She makes The Rules of Magic a tender balm whose wisdom has very little to do with the supernatural and everything to do with life.

The best way to do this is to be who you are, every part of you, the good and the bad, the sorrowful and the joyous. You can never run away. There is nowhere to run to.

p.s. In case you’re wondering, The Rules of Magic is a prequel to Hoffman’s 1995 novel Practical Magic. I don’t mention it in the review because each book stands on its own. I enjoyed Practical Magic when it came out, but Hoffman’s writing is even better now.

Mrs. Everything by Jennifer Weiner

The Fall of Lisa Bellow

The 7 1/2 Deaths of Evelyn Hardcastle

The Orchardist
Faithful: A Novel