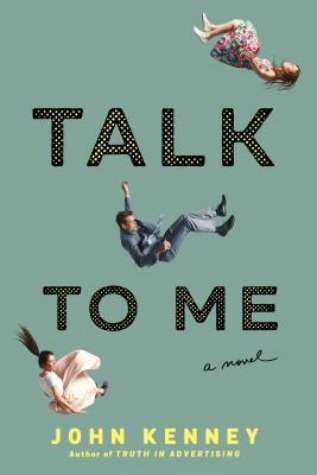 It’s no secret that I’m not a fan of the rich, entitled white man’s club, but what happens when the man is the face of American network news? A man watched and admired for over twenty years? Who, on his 59th birthday has a really bad day and is videoed screaming at a young woman off-screen, calling her a Russian whore? It’s certainly not good or excusable, but how far do we go to make it right? The man is Ted Grayson and his outburst is at the center of John Kenney’s new novel, Talk to Me, an incisive look at navigating human weakness in an age where every action may be captured and shared.

Ted is far from perfect. His marriage has become one of convenience, both for himself and his wife, Claire. In fact, she’s having an affair and getting ready to ask him for a divorce. His daughter, Franny, has tried to break away from her father’s legacy by going into her generation’s version of journalism—a clickbait, TMZ-like website run by a German billionaire who believes everyone’s mistakes are his to exploit. When Ted’s outburst goes viral, he sees an opportunity to get the ultimate insider’s story. From there Talk to Me is like a pipe bomb, exploding with tiny deadly shards of intimate, private details of not only Ted’s life but also those closest to him.

On the surface, Talk to Me is snarky entertainment about the fall of a middle-aged icon who may, or may not, be a real bastard in his private life. But this is not a #MeToo situation and Ted is not that kind of villain. Rather he’s a man who’s made mistakes and Kenney takes the novel deeper by portraying him completely—flaws and all. He does that with each of the novel’s characters.  It works in making Ted and Claire feel real, but Franny, their beloved only child, born after miscarriages and struggles, is another story. From the moment she hits the page, she is a deeply angry, unhappy human being. My sense is she’s supposed to have ODD, which is valid, but it makes for characters who are extreme and push past the boundaries of unlikable into distasteful. She is so horrible for no reason, that I could not relate to her and found her actions implausible, which colored my overall opinion of the book.

My feelings about Franny aside, Talk to Me is a measured look at a subject that is anything but. Kenney probes all the tender places of what feels wrong about the world—inequality, tribalism, incivility—and does so in way that exposes the glass house in all of us. There is the initial righteousness experienced when someone in power falls due to their ego and wrongdoing, but few are left innocent if you dig deep enough. Everyone reading Talk to Me will choose sides, but can any of us open our minds to the other side?

And what of the great hope of social media? Of technology? That it would bring us together? Sure, there were some remarkable blogs out there. But the hope that we would find common ground with strangers, people with whom we disagreed, that we would find a common humanity, see that we are all the same, deep down, had failed. The technology was new. The traits and insecurities, the biases and anger and hatred that we brought to it were not. Technology hadn’t failed. Humanity had.

The Most Fun We Ever Had: A Novel

A Spark of Light by Jodi Picoult
Children of the New World: Stories